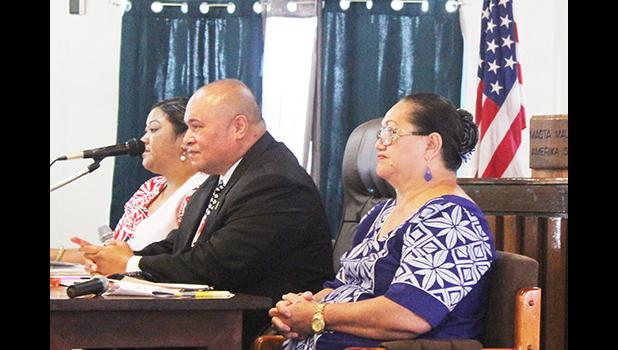 More than one senator told HR director to give a direct response
By
Fili Sagapolutele
fili@samoanews.com

Pago Pago, AMAERICAN SAMOA — Based on it’s “investigation” following the governor’s roll-back of the salary memo, the Department of Human Resources identified several issues, including salaries that “went from $13,000 to $47,000” a year, says Human Resources director Lynn Pulou-Alaimalo during yesterday’s Senate Budget and Appropriations Committee hearing.

Pulou-Alaimalo, along with the governor’s chief of staff Tuimavave Tauapa’i Laupola and ASG Budget Planning Office director Catherine Saelua were witnesses in the committee’s hearing on a Senate resolution, which — among other things — requests a “stay on the roll-back”.

The resolution calls for the committee hearing to review Gov. Lemanu Peleti Palepoi Sialega Mauga’s Feb. 5th memorandum, which orders the roll-back of pay adjustments made without justification in the budget as well as converting contract workers to career service employees without going through the merit process — since Jan. 1, 2019 to the present.

During the nearly 30-minute hearing Sen. Malaepule Saite Moliga, who sponsored the resolution, gave a brief summary of the governor’s roll-back memo, which became effective Feb. 6th, that he says has effected a lot of workers.

Malaepule asked if the affected employees —  referred to in the governor’s memo — had their salaries budgeted for in fiscal years 2019 and 2020.

Pulou-Alaimalo pointed to the provision of the governor’s memo, saying that “pay adjustments of career service employees without justification “violates the principles of equitable treatment of employees expressed” in local law — ASCA 7.0201.

Furthermore “all pay adjustments issued since Jan. 1, 2019 that were made by means other than reclassification, annual step increase, or special incentive awards as required” by local law “are void and will be rescinded”.

Upon receiving the governor’s memo, Pulou-Alaimalo said DHR started conducting an “investigation” and identified several issues. For example, there were salaries that went from $13,000 to $47,000 a year. Additionally there were salaries, which were increased “without any assessment”.

She said these cases identified so far were listed in 2019 and 2020 with salary increases “without justification”.

And “there were incidents where contracts were converted to career service,” said Pulou-Alaimalo, who’s statement was cut short by Malaepule — who interjected and sought direct response from the DHR director.

The Manu’a senator explained that his question is based on the provision of the governor’s Feb. 5th memo which states — all pay increases for career service employees granted since Jan. 1, 2019 that increased employees’ rates of pay above the amounts that were budgeted by law for their positions “are invalid”.

The DHR director responded that the information is not known at this time as the department’s investigation and review is ongoing and not yet completed.

She pointed out that the review and investigation had identified issues of pay increase without justification and conversion of contracts to career service along with a pay increase.

Malaepule, again, interjected and rephrased his question, asking whether DHR had been able to identify employees whose salaries were increased in 2019 and 2020 but were not budgeted in those two fiscal years.

And if DHR has identified these employees, then these are the only individuals who should be affected by the governor’s memo, instead of a full-scale roll-back, as of Jan. 1, 2019 that is now affecting many workers, according to the Manu’a senator, who repeated his question again.

Tuimavave started to give a reply, but Malaepule quickly pointed out that his question is specific for the DHR director and not the governor’s chief of staff.

Instead of answering the question, Pulou-Alaimalo responded with an explanation on some of the young workers, who got paid under the US Labor Department funded employment program, and later were converted to career service. Under government rules, the person must complete a full one-year as a contract worker before being eligible for conversion to career service.

With Malaepule’s question remaining unanswered, Sen. Magalei Logovi’i interjected telling the DHR director to give a direct reply to the question to save time and make things easy. Magalei repeated part of the governor’s memo on pay adjustment without justification in the budget.

Magalei asked if there are any employees effected with this specific provision of the governor’s memo, to which the director responded “yes” and she can provide a list.

Pulou-Alaimalo then continued on with her statement saying that DHR’s review identified a list of violations, such as pay hikes without justification and there are incidents in which the pay increase didn’t follow personnel rules.

“Some salaries were increased to a high amount...,” she said but before she could go any further, Magalei asked the director to provide a direct answer to the specific question.  “Any employees affected?” Magalei asked again, to which the director said, “Yes”.

“Do you have a list of the people whose pay was above the approved budget in FYs 2019 and 2020,” Magalei asked again, and the director responded “yes”.

Magalei requested a list of the total number of affected employees, without employee names to protect confidentiality.

Responding to another question from Malaepule, the DHR director said that one of the issues identified in the DHR investigation is that a contract worker — who is required to work for one-year as contract employee — was converted to career service without working in a one-year on contract. Another issue is that during the conversion to career, the individual also received a salary hike.

Pulou-Alaimalo pointed to local laws in which a person being converted to career must apply for such a position, through the competitive merit system.

In his Feb. 5th memo, the governor also said that conversions of positions from contract worker to career service employee that were made without opening the position to applicants through the competitive merit system in the American Samoa Administrative Code since Jan. 1, 2019 “are hereby declared void, and all such employees will be returned to their contract status”.

Pulou-Alaimalo referred to Title 7 of the law, which provides details dealing with transfer of employees. However, if there is an employee who becomes a deputy director, she said that is a decision by the governor, which is then considered a governor’s appointee.

Because DHR has not completed its review and investigation — based on the governor’s memo — committee chairman Utu Sila Poasa said senators will await the completion of such review for a full report.

And he hopes that such report, in detail, will be done when the Fono returns in July for the 2nd Regular Session, at which time, the committee will set another hearing.