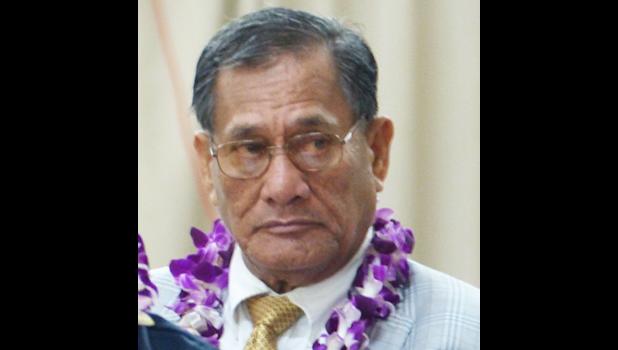 Pago Pago, AMERICAN SAMOA — An administration bill raising the local investment from 17% to 35% for the ASG Employees’ Retirement Fund passed during second reading yesterday in the Senate and is expected to go through final reading today.

Prior to the vote during the Senate session, the Senate Retirement Committee held a hearing which lasted for about an hour, and at least the first 15 minutes involved an exchange between Sen. Magalei Logovi’i and Attorney General Talauega Eleasalo Ale, who appeared alongside Retirement Fund Office executive director, Iaulualo Talia Fa’afetai as a witness.

Magalei’s questions centered on Public Law 30-14, which he says raised the 10% of local investment to 17% during the time of the Togiola Administration, which requested a $20 million loan. He said a provision of the law sets a sunset clause that after the $20 million is paid off, the percentage returns to 10.

Magalei shared a copy of the public law with Talauega, saying that he now questions whether it’s “legal” to amend the law to 35% when there is a sunset provision to return to 10% after the $20 million loan is paid off.

He explained that the $20 million loan was paid off with proceeds the government received from bonds issued by the American Samoa Economic Development Authority (ASEDA).

Talauega acknowledged the copy of the paper he was given, which cites the public law and the sunset clause.

Magalei, a couple of times during the exchange with Talauega, questioned if the Lolo Administration bill — to raise from 17% to 35% the local investment — is legal.

Talauega responded that the law book, the American Samoa Code Annotated, currently being used still shows 17% and the law had not been changed to 10% since he become Attorney General. He reiterated this a couple of times.

For the committee’s understanding, Talauega pointed out that while a lot of bills are enacted into law, not all of them are carried out and this includes public law 30-14 with the sunset clause. He said actions should have been taken to return the law to 10% after the loan was paid off but nothing was done.

Magalei asked, “Who is responsible” for moving to address the sunset clause?

Talauega said they’re conducting research on what happened in the past, and he apologized to Magalei, saying he can’t answer he senator’s question about who is responsible.

Talauega noted that the law is the law and the current law, which shows 17% remains in the law book and has not changed.

Magalei continued to argue that there’s a sunset clause to return the percentage of local investment to 10 after the $20 million is paid off and “that is part of the law”.  Magalei again questioned Talauega on public law 30-14 and the sunset clause, saying he is concerned with the matter being challenged, if the current bill becomes law.

Talauega said if a challenge does occur, it’s his job to stand up to protect the laws of American Samoa.

At one point during the exchange, Magalei said Talauega was not responding directly to his questions.

Talauega said if the honorable senator disagrees with his reply, there’s nothing much he can do, adding that many people don’t agree with his answers and his decisions as an attorney.

“But that is Talauega’s answer, the Attorney General of American Samoa, the law is 17%,” said Talauega.

Later on during the hearing, in response to another senator’s question, Talauega explained that the Fono is to “update” the law book — the Code Annotated. He added that the bill pending in the Senate was drafted from the 2007 updated version of the law book — and reflects 17% for local investment.

At the outset of the hearing Talauega noted that the request to increase the percentage of local investment, as proposed by the governor, is an “investment” in the Hawaiki cable system, as well as other future projects for the government. And if the move, through the bill doesn’t come through, he said the government will look at other sources such as a bank or another off island retirement fund — which means the investment will not stay on island.

He added that a decision by the Retirement Fund board of trustees to invest or not invest, rests with the board themselves. He said the bill does not direct the board to invest.

Iaulualo said the proposed change to the law doesn’t stop the board from conducting its due diligence work on investments. However, he added, the board supports the measure.