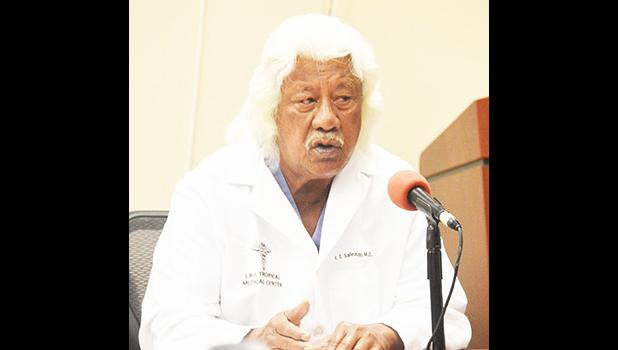 Pago Pago, AMERICAN SAMOA — The COVID Task Force on Monday suspended Samoa flights until further notice in the wake of record number of cases out of the independent state, with Chairman Lt. Gov. Talaeuga Ale issuing a word of caution to local frontline workers as it prepares for their flight this week from Hawaii.

In a press release on Tuesday from the Task Force, Lt. Gov. Talauega Eleasalo Va’alele Ale who is chairman, said the suspension will remain until the Task Force gets more information and is comfortable with the situation in the independent state, where 26 positive COVID cases were discovered from a flight from Australia last week.

For the first time since the COVID pandemic, frontline workers in Samoa who were in the quarantine facility to care for the travelers are among the positive cases.  Samoa has since upgraded its threat level to 3 – the highest level of risk under its COVID-19 Response Plan – and is observing a nationwide lockdown which had been extended from the weekend.

At the regular weekly meeting of the Task Force on Monday, Sen. Faaivae Alex Iuli Godinet, one of two senators representing the Senate on the Task Force, said senators are concerned for the health and safety of our people and recommends that flights be held off for some time until leaders can assess the situation there.

LBJ Chief Medical Officer Dr. Iotamo Saleapaga said until American Samoa is clear of what’s going on in Samoa, it is best to suspend flights until further notice. Noting that while there have been cases reported from Samoa from international flights in the past, he said it’s different this time because some of those affected are Samoa’s very own frontline workers.

At the recommendation of the Department of Health, the Task Force will reinstate quarantine for travelers from Samoa should flights be allowed in the future.

Since December, travelers from Samoa did not undergo quarantine but were tested at the airport upon arrival before being released.

As the Task Force prepares for the Hawaiian Airlines flight scheduled to arrive on Thursday this week, Talauega told doctors and health leaders who attended the meeting in person and those who participated via Zoom from the ASG Office in Hawaii not to let their guard down.

“Let’s be vigilant,” he said. “Do your work with all honesty, don’t cut corners and always remember to wear your PPEs [personal protective equipment] properly.”

The lieutenant governor also reminded directors of departments that will be involved in the clearing of passengers to make sure their employees are accounted for and that they must follow quarantine procedures prescribed by DOH.

A total of 277 travelers have been approved to travel on the Jan. 27 flight following their second COVID test. However they will undergo two more tests before final approval to board the flight. The travelers will be quarantined at the Tradewinds Hotel, Fatuaoaiga and the ACF #1 facility.