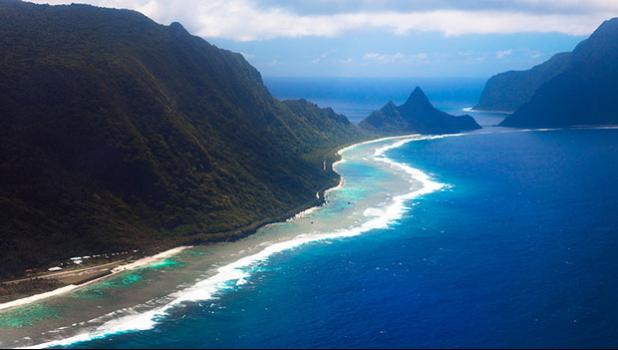 Manua Islands, AMERICAN SAMOA — Ocean explorers undertaking bottom sea mapping around the waters of Samoa, are wary of an active volcano not far from the Manu’a Island group in American Samoa.

The Vailuluu Volcano is just 35 miles east of Manu’a and is felt to pose serious threats to all the Samoan islands, as it continues to remain active.

The findings and assessment are by the Ocean Exploration Trust (OET) team of scientists working on the research boat E/V Nautilus.

An MNRE senior officer, Fuimaono Lameko Talia, is working together with the OET scientists and is already aware of the risks from the active Vailuluu Volcano.

“This volcano can generate a massive tsunami as it continues to emerge,” Fuimaono told Newsline Samoa.

An OET diving team has confirmed the active state at the moment of the volcanic site.

OET Mapping and Science Coordinator Lindsay Gee, was able to disclose to Newsline Samoa that the majority of the waters surrounding Samoa is unmapped.

His hopes are the findings after mapping work is done will assist the country in understanding of what are likely to be discovered underneath the sea.

“Our research particularly in Samoan waters is going to map those unmapped areas,” Gee said.

The OET researchers are aware that a lot of waters around Samoa, probably around 80% are deep waters, and are unmapped.

Knowing what lies below and the benefits they offer is going to require management as natural resources, and the study will be able to show that up.