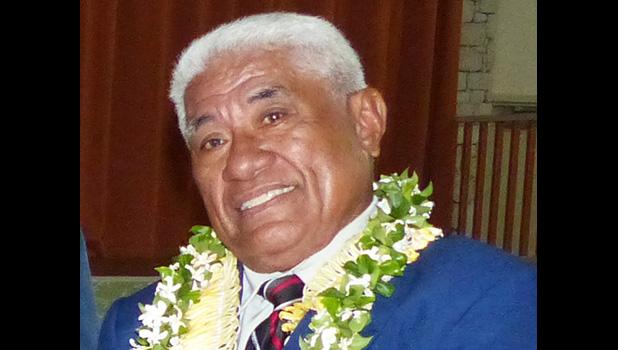 Pago Pago, AMERICAN SAMOA —  Rep. Kitara Vaiau is calling for the American Samoa Immigration Office to put in place a program called ‘suspense file’ to prevent the number of overstayers in the territory from growing every year.

The Saole faipule who worked for the American Samoa Immigration Office for many years told the House of Representative last week that in order to decrease the number of overstayers in the territory, Immigration needs to set up a ‘suspense file’ in their computer system to make it easy for them to track down immigrants entering the territory, to remind them of their departure dates before their permits expire.

Vaiau said that it’s almost everyday that he reads in the newspaper about overstayers being arrested and accused of committing crimes in the territory, although the laws are already in place, but no one bothers to enforce them.

“I’m tired of reading this type of news,” Vaiau told House members. “This is a true sign that tells us that Immigration is not doing their duty. They have failed to enforce the law that they are to uphold and enforce.”

According to Vaiau, most of the inmates serving time behind bars at the Territorial Correctional Facility (TCF) in Tafuna are overstayers, charged and convicted by the court for serious crimes. “Our government is spending thousands and thousands of dollars everyday to feed these people behind bars, and this money is taxpayers money."

Vaiau said the only way to control the problem of overstayers roaming around in town and costing the government a lot of money, is for the Immigration Office to organize a ‘suspense file'.

“So every morning, the Immigration officer who is dealing with the issue of overstayers checks his list, and then informs the sponsor that this person has two more days to stay, before he/ she has to leave the island.”

Vaiau said the process is very simple and if Immigration can set up a program like this in their computer system, it will be very easy for them to track down every single immigrant who enters American Samoa through any type of entry permit.

He said the program will make Immigration's work much easier, because not only will they know exactly when the entry permit will expire, but it will also allow them to work together with the sponsors.

“The issue with overstayers in this territory makes me sick. The main reason why there are a lot of overstayers in American Samoa is because the Immigration office is not doing its job. They are the main problem, not the overstayers,” Vaiau told Samoa News.

He said sponsors need to understand the law before they bring any foreigners in. Vaiau recalled a news article published last month, regarding a man being charged for attempting to kill his sleeping sponsor.

He said when these types of incidents occur on island, it is our people, especially the government, that need to step up and do something to prevent it from happening again.

The case Vaiau was referring to is the attempted murder of a man in Faleniu.

The government alleges that Vaimoe Seumanu, being held at the TCF on $100,000 bail — attempted to slice his sponsor's neck over a FEMA check.

“This is not safe for our people, when they show their heart of love by bringing onto our shores, people from other countries including neighboring Samoa, to seek a better future for them and their families, but end up in tragedy,” Vaiau said.

Vaiau said that based on the information he has received, some immigrants come in on a 30-day permit, and continue to stay in Am Samoa for up to 5- 8 years without proper legal documentation.

He said that according to reports from the newspaper last year, it was through the hard work of the Department of Public Safety that some of these overstayers were identified, after they were arrested for various crimes.

When asked about a solution to the problem with overstayers, Vaiau said the only solution is for the Immigration Office to do their work and enforce immigration laws.