Plans to beautify Fagaalu Park in the pipeline 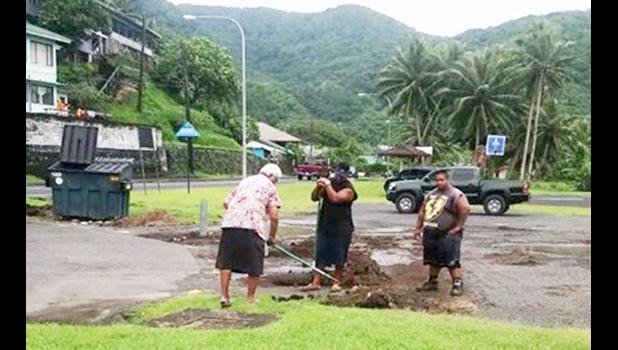 Last week, following a night of continuous showers, director of the Department of Parks and Recreation, Ken Tupua (far left) came armed with a shovel and was digging around a muddy area at Fagaalu Park.

Parks and Recreation employees were also present, working alongside their boss.

Samoa News stopped by and spoke to Tupua briefly. According to him, the goal is to make Fagaalu Park “look nicer”. He explained that the area he was digging will be blocked off. (This is where cricket spectators and basketball players usually park to watch the games).

Tupua pointed to a “turn-in” on the nearby sidewalk area and said that spot will be opened so people can drive in and park near the field during sporting activities. Eventually, he continued, the existing bathroom facility at Fagaalu Park will be relocated - pushed back towards the sami side - while the shelter next to it will be demolished and in its place, 4 Samoan fale will be erected. Along the newly constructed rock wall, DPR employees will plant trees - which will improve the aesthetics.

Another part of the vision, said Tupua, is to lay grass at the area near the basketball courts, and the only thing that will run across it is the driveway leading from the new turn-in.