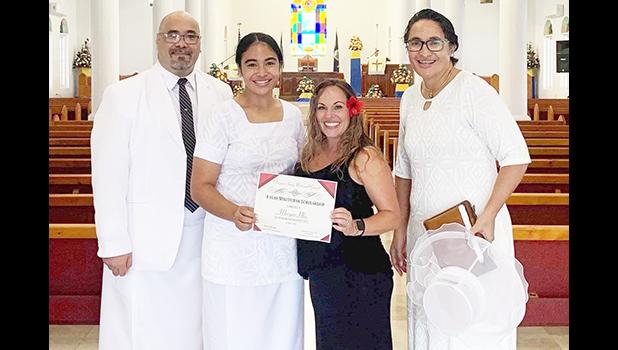 Pago Pago, AMERICAN SAMOA — A partnership between the Oregon Army National Guard (ORARNG) and the Southern Oregon University (SOU) ROTC Program paved the way for SFC Sheri Hoddle to travel to American Samoa recently, to share information on education benefits to local students, which would allow them to attend college in Oregon with 100% free tuition.

SFC Hoddle is the recruiting and retention NCO for the Oregon Army National Guard.

“We started this program in February of last year and are having great success,” SFC Hoddle told Samoa News via email earlier this week. “In the ORARNG, our soldiers automatically get the in-state tuition cost as well as Federal Tuition Assistance, which is the same as all other branches - and covers about $4,000 per year to help with tuition.”

In addition, SFC Hoddle continued, “the governor of Oregon has written a bill to cover the remainder of our soldiers’ tuition while attending college in Oregon, giving them 100% State Tuition Assistance (STA).” Furthermore, soldiers will also get the Montgomery GI Bill, giving them a minimum of $384 per month, on top of their drill pay to help with books and living expenses.

“This allows them to have 100% of their tuition paid for, free housing, and money to help live on,” SFC Hoddle continued. And through the partnership with SOU, if soldiers are participating in the ROTC program and are on track to get a scholarship from ROTC, they provide housing to the ROTC cadets. The STA, as well as the free housing, are unique to the ORARNG and SOU ROTC. Once our soldiers qualify for the ROTC scholarship, they will then be awarded 100% tuition and fees, a monthly living stipend of $420 per month for living expenses, $1,200 per year for books, and their drill pay goes up to E-5 pay.”

According to SFC Hoddle, “most of our soldiers will qualify for the ROTC scholarship their sophomore year; so they will use the National Guard's education benefits and the ROTC housing to pay for their first year.”

She highlighted the case of Morgan Ulu of Fagatogo, who recently applied and competed for the 4 year Minuteman Scholarship. SFC Hoddle said, “Our state only offers four of these 4 year scholarships each year, making it very competitive.”

Ulu enlisted into the Oregon Army National Guard on June 17th at the Hawaii Military Entrance Processing Station (MEPS). She submitted her application for the scholarship prior to the August 1st deadline, and although there was a large number of applications submitted, Ulu was 1 of 8 applicants selected for the second phase - interviews.

Ulu, while traveling with the Native Youth Community Adaptation and Leadership Congress in Virginia, completed her phone interview and impressed everyone on the panel, that she placed second out of the 4 scholarships awarded — missing first place by only two points, out of 800.

“We could not be more proud of Morgan and can't wait to see what she will accomplish on her journey in the National Guard, and becoming a leader of soldiers through ROTC,” SFC Hoddle said.

Ulu — the first American Samoan to receive the Minuteman Scholarship — was the valedictorian of Samoana High School’s Class of 2018. She will begin her journey at SOU later this year in the Fall where she will participate in ROTC in order to commission as a second lieutenant upon graduation. She is the daughter of Rev. Iasepi and Leone Ripely-Ulu.