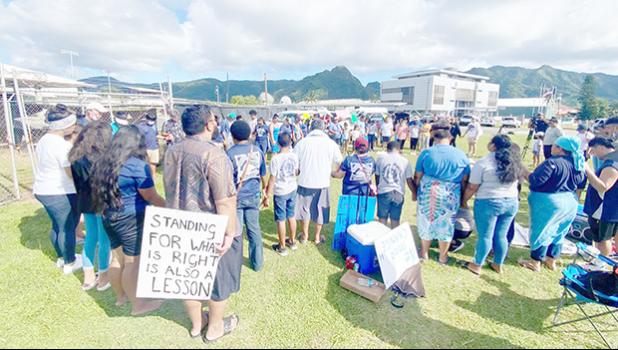 Pago Pago, AMERICAN SAMOA — Thirteen teachers at South Pacific Academy who went on strike last week Monday presented a signed petition to the SPA board of directors, which met on Wednesday afternoon. The meeting was chaired by new board member, Fiti Sunia, who is also the Associate Justice of the High Court.

With a majority of teachers on strike, a few parents have transferred their children to another private school, as the majority of the teachers are on strike, and students are not getting the classroom instructions they need, with temporary individuals watching the classes, according to information some parents shared with Samoa News over the weekend. As of yesterday, SPA classes were still scheduled to continue this week.

The striking teachers secured local attorney Charles Alailima, to help them present their petition, which raised six concerns. The main one is the concern about maintaining the integrity of the grading system, especially through the computerized programs.

“We need policies established with teacher input to address serious conflicts of interest with overseeing grades, student policies and classroom management. We have specific concerns about access to and interference with the school grading system and accounts,” according to the petition.

“The grading system must be handled in a manner that promotes confidence that it is fair and uniformly applied,” the teachers point out in the petition.

“We are concerned that the access to the PowerSchool grading system and Google Suites for Education that is being provided to non-professionals is undermining that confidence,” it says.

A second important issue was the lack of due process given teachers when they were terminated after raising concerns — whether before parents or with the Board — about the teacher needs and concerns that affect their performance.

“We need improved response to teacher complaints and the relationship with the Board. We as teachers have been experiencing intimidation and harassment when we individually bring our concerns to members of the Board about management,” the petition pointed out.

“We need either a teacher representative on the Board [or a way to] allow for a process that will allow teacher complaints with respect to management decisions to be handled with discretion and confidentiality,” it says.

Other concerns raised in the petition:

• We need to address inconsistencies between the employee handbook and board policies to ensure due process of termination of personnel and remove the constant threats of termination and contracts when teachers raise their concerns.

• We need to address the neglect for teacher financial security by: Providing for negotiations for a livable salary; Providing retirement benefits for all teachers and payment of collected retirement contributions in a timely manner; and Payments for extra work such as after-school tutoring, sports programs and WASC reports.

• We need policies in place that are consistent with national standards for schools that make the principal, office managers, teachers and other staff clear as to their responsibilities and authority and to be sure these are consistently and fairly enforced.

• We need consistency in review for employment assignments to ensure confidence that teaching and management positions overseeing teachers within the organization are based on merits, education qualifications, and experience in the educational field.

Alailima told Samoa News last Friday afternoon that the “recent and abrupt termination” of one teacher who has taught at SPA for decades and “who had been active in raising teacher concerns brought this matter to a head” — referring to the petition and strike.

“It was this abrupt termination through a half page letter accusing him (the teacher) of incompetence and without a due process review that is stated in the SPA employee handbook that brought the teachers to support [the] collective action strike” last week Monday, Alailima explained.

He also says that last Wednesday morning “another teacher who had been raising the concerns about the access to the grading computer system by non-staff was then served with a similar half page letter dated the previous day saying he was terminated for incompetence.”

The teachers attended the board meeting last Wednesday afternoon, where Sunia “first told the teachers that he just recently accepted appointment to the Board specifically to deal with the issue of the teachers' collective action strike,” said Alailima, who was present during the meeting.

Alaillima said Sunia agreed that the issues raised were relevant to teacher concerns and that out-dated corporate articles and by-laws needed to be addressed but that they would need to take time.

Additionally, Sunia “emphasized the immediate need was to find out what could be done to get the school reopened,” said Alailima

In response to Sunia's request, “I presented the teachers request to reinstate the two terminated teachers and then just follow appropriate due process procedures for disciplinary proceedings that would allow the two teachers a chance to find out what specific evidence was being presented and provide a chance to defend themselves,” Alailima recalled to Samoa News of what he said at the meeting.

Then last Thursday afternoon, the board met with SPA parents and Sunia chaired the meeting where Sunia was “respectfully acknowledged by the parents because of his judicial position,” Alailima said, and noted that there was overwhelming support from parents for the reinstatement of the two terminated teachers.

“Unfortunately and to the deep disappointment of parents and teachers the request for reinstatement or at the very least rescinding the two terminations... was rejected by the Board,” Alailima said.

“The Board apparently just does not want to have the two terminated teachers back on campus even though SPA is short staffed and needs everyone on board to get through these final months of the school year.”

Upon hearing of the board’s rejection, the parents who had attended the meeting then discussed their position supporting the teachers. Last Friday, “teachers were immensely grateful that the parents came out in full force to stand with them,” said Alailima.

“They have continued to help students needing their college recommendations and other requests. They will continue to develop the online lesson plans as much as they can to help parents continue student learning during this difficult period,” he said.

“They love their work and simply cannot comprehend why it is so hard for the Board to acknowledge that the terminations did not follow the established rules of employment,” he noted. “If they want the school to reopen immediately all they need to do is simply rescind these two terminations and start again properly if they really believe there is evidence warranting immediate and drastic discipline against these teachers.”

The striking teachers will continue their peaceful protest, until the two terminated teachers are reinstated.

On Mar. 4th supporters — parents, alumni and members of the community —  of SPA teachers launched an online petition directed to SPA board and others, calling for a fair and safe working environment for SPA teachers.

Among the demands in the petition is the removal of the board chairperson, Salamaina Satele, in order “to restore integrity and trust in the Board”, reinstate the two terminated teachers, “affording them the rights of due process”; and removal of Sauvao from the board and to call a new PTO election.

The petition also seeks to remove administrative access granted to the chairperson and members of the Board to PowerSchool “and restrict access to ONLY office administrators - i.e. principal, IT manager and office manager.”

“WE are prepared to no longer support South Pacific Academy if these changes are not made,” according to the petition, which identifies the two terminated teachers by name — Ah Sam Lei Sam and Jenward Montalbo.