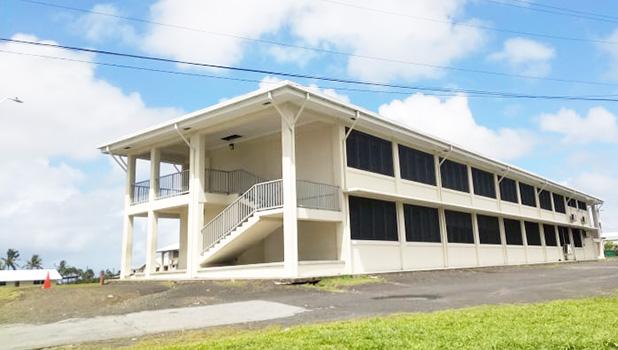 Pago Pago, AMERICAN SAMOA — Tafuna High School’s new two-story building dedicated in September, 2020 will not be in use when students return to school next week to begin the new school year 2021-2022, after the Acting Governor, Talauega Eleasalo Ale visited the school compound to follow up on school preparations before classes begin next week.

Sources further told Samoa News that the decision to close the building was made after safety issues surfaced. The THS principal made the announcement to her staff that classes that were scheduled to be held in the new building would not happen — until further notice.

Samoa News was told that the building was said to be ‘unsafe’ due to cracks observed in the concrete foundation.

The project is one of a series of projects funded by the U.S. Department of Interior last year. The building was constructed by Nana’s Company, while supervised by the Department of Public Works.

The two-story building is supposed to house a computer lab and a classroom dedicated to students with special needs, as well as regular classrooms for students.

The initial construction budget for the building was $885,000. However, requests for a computer lab and the special education classroom necessitated changes to the building plans to accommodate these requests and resulted in the total building cost to escalate to $1,088,000.