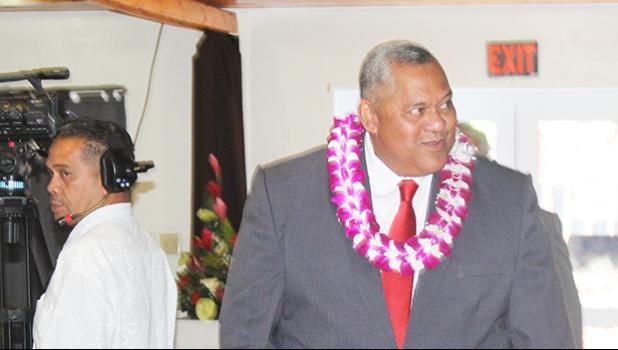 Speaking to a joint session of the Fono on Monday, the governor says the projects funded with the bond revenues don’t qualify for COVID-19 money and that the debt payment remains the same as well as the terms of the debt.

Projects funded with the new debt: $11.5 million for completion of the new Fono building, which includes offices for lawmakers; $7 million for the new high court building and $4.5 million to conduct study for the relocation of the Territorial Correctional Facility and the Juvenile Detention Center.

Furthermore, proceeds from the Series 2021B & C bonds will re-fund certain outstanding Series 2015B & C bonds for savings.

The “ASEDA Refunding Bonds”, is among several government developments summarized in the Administration’s “Mid-Year Performance Report” distributed to lawmakers on Monday.

“The opportunity to refund our bonds in 2021 is a testament of quality and worthiness that the American Samoa Government has demonstrated its fiduciary responsibility and commitment to fulfilling its financial obligations,” the report states.

“The infrastructure of our debt-management policies and legislation allows our administration the flexibility and still maintains the controls to ensure sound financial stewardship of our government debt,” it says.

“Ensuring our debt is managed appropriately, will allow for proactive plans to combat the impacts of climate change, improved healthcare, continued development of our growing and educated workforce and expansion and diversification of our economic development engine,” the report points out.

Timeline shown in the report as to when the Fono project is to be completed is set for December 2022. No information was provided on the high court building — for which a ground breaking ceremony was held late last year —  or when the study of relocation of TCF is to begin.

It does say that the “bonds have closed” and “funds [are] with Trustee”. And the refinancing saves more than $2.75 million in interest expense - or 10.8% reduction.

The Administration points out in the report that American Samoa’s creditworthiness in the financial markets has been dramatically improved as a result of the performance of the ASEDA bonds as well as the structure and history of debt- service repayment.

“This improvement has been best illustrated by the interest in the 2021 refinancing of the 2015 ASEDA bonds as nearly 20 institutional investors expressed intent to purchase the 2021 ASEDA bonds,” the report states. “The initial 2015 ASEDA bond issuance had very few with only 1 for 2015 B for the bank with a high interest rate.”

“The reduced rate range and amount of interested investors are both significant factors in the improved valuation and perception of the ASEDA bond investment and by extension American Samoa in the financial markets,” the report states.

The US Government Accountability Office (GAO) in its US Territories Public Debt Outlook — 2021 Update, released June 30th to the US Congress and also made public,  points to the increase of American Samoa’s public debt.

“American Samoa’s public debt has grown and the territory continues to face fiscal risks, such as a reliance on a single industry and significant pension liabilities,” GAO points out, noting that the territory’s economy continues to rely heavily on the tuna processing and canning industry, with currently only one cannery operating — referring to StarKist Samoa.  (See Samoa News edition July 1st for details.)