Monday's rally against domestic violence draws a crowd in Fagatogo 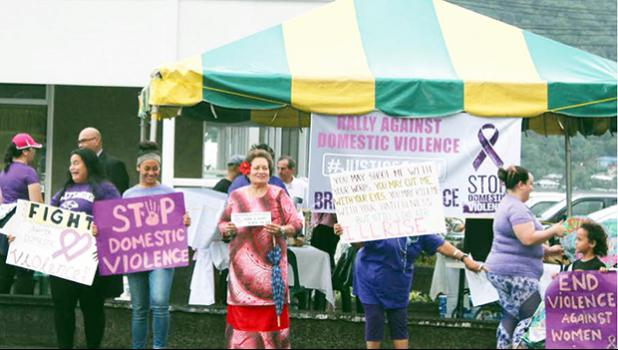 Organizer says, 'we want to raise awareness but …let the court do its job'
By
Fili Sagapolutele
fili@samoanews.com

Pago Pago, AMERICAN SAMOA — More than 50 people, including men and young children, gathered before dawn yesterday morning for a rally against domestic violence, with organizers and speakers calling for a united front against such criminal behavior.

The rally also called attention to the latest victim, with supporters holding signs seeking “Justice4Lori” — the wife of former DYWA director Jonathan Fanene, who is facing 13 criminal charges for the alleged assault of his wife and his sister on May 26th.

Rally supporters started gathering after 6a.m in front of the Fagatogo Square, across the street from the District Court building, where Fanene was seen walking into the building before the start of his court proceedings at 8:30a.m.

Tanya Ma’o-Aab, who spearheaded the rally was able to get the word out quickly — although it was only planned last Friday — through social media. During a joint Samoa News/ KHJ News interview, while it was still dark yesterday morning, Ma’o-Aab said she knew Fanene was going to appear for another court hearing yesterday.

“I just thought that, ‘there needs to be awareness, we need to eradicate domestic violence’. It’s like a silent killer. Nobody likes to talk about it here. It's taboo,” said Ma’o-Aab, who is Lori’s cousin.

“So I just feel that this is the time that we should get together and just stand together, be together. And I especially just want Lori and her boys to know that we stand with them. This is not acceptable, there should be zero tolerance for domestic violence,” she continued.

Asked if she thinks the rally would jeopardize the case going forward in court, Ma’o-Aab responded, “that was considered” but since the case went to court, “I had to decide how to talk about this. The justice system will go on, and they will do their jobs.”

She continued, “But I, as a sister, a mother, I feel like I need to stand up and say something too. And I have something to say about this: Domestic violence, I do not agree with it. I stand against it.”

She said the high number of supporters who came out for the rally shows that, “I’m not the only one that’s feeling this way. There’s a bunch of us that feel this way. And this is the time — I want the court to hear, I want our leaders to hear — that this cannot happen. This needs to be stopped.”

There have been a number of domestic violence cases that have come before the court over the years, and in recent weeks. While most of the victims are women, there have also been cases of domestic and sexual violence against men and children.

Asked “why just Lori” now? Ma'o-Aab responded by first acknowledging that there have been many cases of domestic violence. But “this is how I look at this [Fanene] case. We have somebody, that was the director of the Department of Youth and Women’s Affairs. That was a big hit in the face for all of us,” she said.

“So I feel, this is not just about Lori. This is the bigger picture here. We need to stand together as women, we need our leaders to hear us, and that’s why we’re here today, because we all feel the same way,” she explained.

“I want awareness out there. I want our people to know, that help is here. You have sisters who are willing to stand with you, fight with you,” she continued. “It’s about us women and even men, who are affected by this. So that’s our stand. Stop domestic violence.”

There were at least 10 adult males who were seen at the event. Asked if she thinks attendance by male supporters was due to the fact that the case is against Fanene, a well-known person, Ma'o-Aab responded, “It may be. It's a high profile case. You cannot deny that. Everybody knows who Jonathan Fanene is. But everybody has their own beliefs, and they stand against domestic violence.”

“And I’m proud to see these brothers here, supporting the cause. Because it shows me we have good men out there, who are willing to fight with us,” she said.

He said there are no winners in domestic violence. “And that’s what we pray for. Pray for healing, pray for God’s mercy, we pray for God’s direction and guidance. Jesus taught us to forgive and it's part of healing. God will never forsake us in our time of need.”

She recalled briefly, her time working in Arizona for years as an investigator, with Child Protective Services, where she dealt with children who endured domestic violence in their homes.

“But never did it hit home, or in front of my door. Now that sister Lori has gone through it, it hits home and it hurts. It hurts from afar, but there’s hope, because from her story we can move forward, we can raise awareness, and we can eradicate this,” she said.

She called on the community to, “put a stop to domestic violence. It’s not only hurting our families, it's our community that we have to think of, as well.”

Among the speakers invited, was Congresswoman Aumua Amata, who said, “Here in American Samoa we value our way. Even as the world changes, and technology grows, we value our traditions and our culture. We honor others. Our way is good.”

“At the same time, it must never be misunderstood, [and] wrongly and falsely to cover up something bad. Domestic violence goes against the Samoan way. Fa’aSamoa conveys honor and dignity, not shame,” she declared.

“Make no mistake, domestic violence is a crime and we have a duty to prevent it. The law and the courts take domestic violence seriously now; but you know the best defense is you, all of us,” she told the gathering.

“You know the family, your village, and you often know when something is not right,” she said. “Talk to someone who can help - a matai, pastor, an officer of the law. God puts a special responsibility on leaders to protect and help those in need.”

(Samoa News will report tomorrow on comments from other invited speakers)

Following the speeches, the supporters moved to the sidewalk in front of the Fagatogo Square with their signs and banners, and waved to the morning motorists, many of them responding by honking their car horns.

At around 7:45a.m., the number of supporters reduced a little, as people left for work and other obligations. Supporters also moved away from the front of the Fagatogo Square, to the front of the Fono compound, to reduce the noise as the District Court was about to open. It was also during this time that several police officers were present around the area.

At least five times, a passerby would call out, “Justice 4 Lori” and the supporters responded with the same phrase.

Before 8:30a.m. the rally came to an end. Ma’o-Aab thanked everyone for coming out. “I know you’re hurt, but onosa’i. Show our support for Lori,” she said, and asked supporters to let the court do their job in this case and “we push them.”

“Let’s do this the right way,” she said, and asked supporters to remember that, “we’re fighting for Lori and the kids”.

Samatua Logoai thanked supporters on behalf of “Lori and the Savusa family” for their attendance. “We have to do this, not just for Lori,” he said, and reminded everyone to allow the justice system - the court - to do its job.