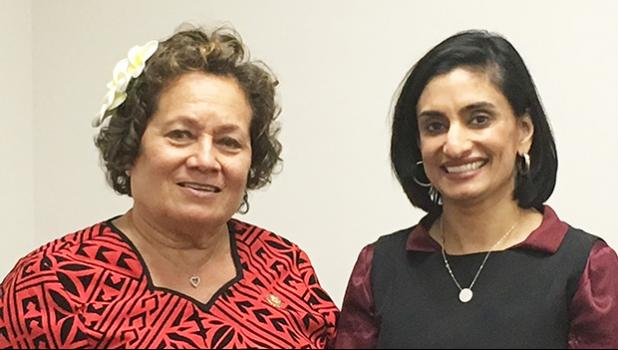 Senate Finance Committee Chairman Chuck Grassley (R-IA) and Ranking Member Ron Wyden (D-OR) have announced an updated version of their bipartisan Prescription Drug Pricing Reduction Act of 2019 and an agreement to fund critical, expiring health care programs, including Medicaid funding for the territories. This would provide a new cap of $84 million per year for 4 years for American Samoa ($336 million total through 2023).

“This is excellent news, and I strongly urge Congress to pass this into law before Christmas,” said Aumua Amata. “This bill would deliver a major increase to American Samoa in two important ways. First, the cap would be raised to $84 million, a dramatic and much-needed 600 percent increase from the $12 million of the past. Secondly, the match rate would be improved to the maximum allowed (except in the case of disasters) 83 percent federal share. This is much better than the previous 55 percent rate, which was not equitable with the states. I commend and thank Chairman Grassley and Ranking Member Wyden.”

Specifically, the FMAP for USVI, Guam, American Samoa, and the CNMI would be set at 83 percent (the statutory maximum for the state FMAP formula) for 4 years, while Puerto Rico’s FMAP would be set at 70 percent. The bill includes efforts directly from the House bill HR 2328, which Congresswoman Amata cosponsored.

“This agreement delivers even more savings to Americans, cracks down on the drug industry’s tricks, and secures key health programs for years to come,” said Ranking Member Wyden. “I’m proud of the bipartisan work that’s been accomplished so far, in particular for Chairman Grassley’s leadership and our commitment to capping out-of-pocket costs for seniors and requiring drug companies to pay back Medicare if they increase prices faster than inflation.”

“Thank you also to Governor Lolo, as this provision is the result of years of long work and cooperation by all the territorial representatives and all of the territorial governors,” continued Amata. “I want to especially thank Senate Finance Committee members Senators John Thune, Richard Burr and Tim Scott. I reached out to them on their visit to American Samoa, along with Senators Mike Crapo and Mitt Romney, all supportive of key provisions.”

“I’m proud to have cosponsored the House efforts, and I appreciate House Energy and Commerce Committee Chairman Frank Pallone and Ranking Member Greg Walden for their leadership on that effort, as many of those building blocks are in this major legislation,” she concluded.