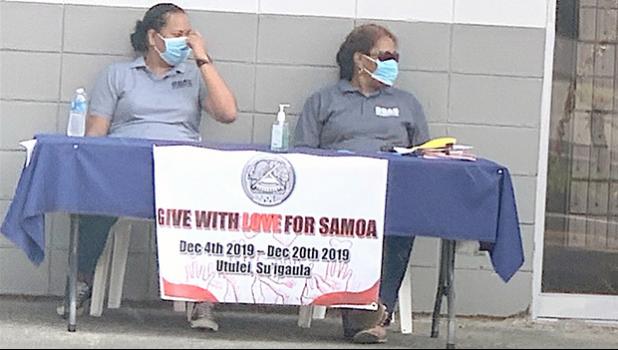 Pago Pago, AMERICAN SAMOA — The Health Department has moved to early next week, the start of the measles mass vaccination in American Samoa. Meanwhile the Samoa government-owned MV Lady Naomi will not carry passengers on the inter-Samoa sail after ASG placed more restrictions on travel between the two Samoas due to the local measles outbreak.

ASG-organized “Fesoasoani Alofa mo Samoa Fundraising” — which has so far collected just over $130,000 — will end at 4p.m. tomorrow (Friday) instead of the planned Dec. 20th end date.

However, Motusa was on KVZK-TV News on Tuesday night speaking about changes to DoH’s plan. He didn’t explain the reason behind the changes but noted that the immunization plan is implemented in two phases.

Phase one targets first responders such as police officers; and school children who are not up to date with the required doses;  and infants between 6-12 months old — which is the age group added to the list of immunized individuals after the local emergency declaration became effective Sunday.

Motusa said the DoH clinics in Tafuna and Fagaalu will focus on infant and children immunizations while two sites — set up at the A.P. Lutali Executive Office Building — and the Haleck Business Center building in Ottoville that will be called the EOC site — will focus on first responders and others.

Starting Monday, Dec. 16th to Dec. 21st is the mass vaccination, targeting more than the 12,000 whom DoH believes have not been vaccinated, said Motusa, adding that another vaccination site added to the list is StarKist Samoa.

(Samoa News understands that StarKist management made a request for the cannery, which employs more than 2,000 workers.)

Another change is that DoH will carry out the vaccination starting from the western side of the island, with sites in Amanave, Leone, and Vailoa. Motusa asks residents in nearby villages who have not received their shots to go to these three villages.

(Samoa News will report later on the other villages targeted for vaccination in case there are any other changes implemented by DoH. Motusa didn’t say at the cabinet meeting if certain villages would be vaccinated first.)

Following the mass vaccination, Motusa said DoH will compile a complete report on the latest measles development update and submit it to the governor for review and further action.

He stressed that current travel policy restrictions — including the 14-day quarantine for travels and required record of MMR shots — does not apply to Hawaiian Airlines flights in and out of Pago Pago. He said DoH is working with Hawaiian’s local and Honolulu offices to ensure this message is clearly emphasized to airline officials, as well as travelers on the American Samoa route.

“We are encouraging these travelers to carry your immunization shot records with you, in case you decide to head to Samoa for the Christmas holiday,” he said, adding that once a person heads to Samoa, then the 14-day quarantine requirement comes into play and therefore, the MMR record is needed. The traveler’s MMR record will be reviewed by DoH.

Samoa Shipping Corporation, which operates the MV Lady Naomi, issued an “urgent notice” Wednesday in Samoa (Tuesday in American Samoa), saying that “due to American Samoa's containment of the measles outbreak, passengers are now banned from traveling between the islands until further notice.”

“Despite passengers not permitted to travel, the vessel will still continue its sailing” carrying cargo, it says. The vessel left Apia Wednesday in Samoa and arrived in Pago Pago yesterday morning.

The governor’s emergency declaration states in part that “Effective Immediately” — all entry permits and entry permit waivers for those traveling through Samoa and Tonga “are suspended until further notice.”

“Only entry permits and entry permit waivers for medical emergency situations will be approved but must be reviewed by the Governor’s Office for final approval,” the declaration points out.

Le’i, who was accompanied during the broadcast by Lt. Gov. Lemanu Palepoi Sialega Mauga, ASG Treasurer Ueligitone Tonumaipe’a and Manu’a District Governor Laolagi Vaeao, reminded ASG’s workforce of the monetary threshold to be donated to the fundraiser: Every ASG employee is $10; deputy directors’ donation threshold is $100, while it’s $300 for  directors, as well as CEOs and presidents of ASG semi-autonomous agencies.

Le’i reminded all ASG employees and cabinet members that their contribution is to be turned in by 4p.m. Friday or by 10a.m. Saturday, where there will be an official announcement by the governor of how much was collected.

The announcement, which will also include another cabinet briefing, will be at the Fale Samoa at the Su’igaula o le Atuvasa Park in Utulei, the site of the fundraising.