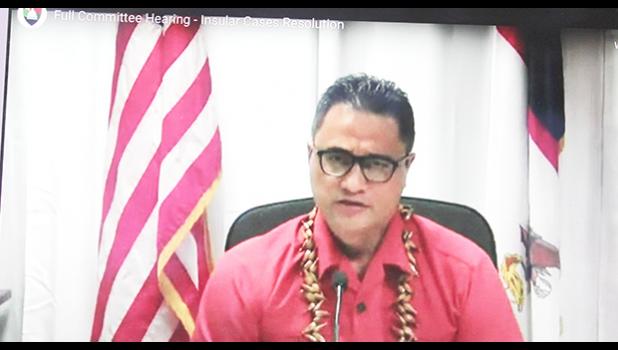 Pago Pago, AMERICAN SAMOA — Lt. Gov. Talauega Eleasalo V. Ale has made clear to a US congressional committee American Samoa’s message that any change to its political status and rights under federal territorial law, should be decided by local elected leaders, the territory’s people and the elected delegate to the US House — not by unelected federal judges.

Talauega was among the panel of witnesses who provided testimony yesterday during the virtual US House Committee on Natural Resources, Insular Affairs hearing on H.R. 279 - “Insular Cases Resolution - pertaining to “Insular Cases”, which are a series of opinions by the U.S. Supreme Court in 1901, about the status of U.S. territories acquired in the Spanish-American War, and the periods shortly thereafter.

Washington D.C. based Equally American, a non profit group which fights to advance quality and civil rights for the millions of Americans living in US territories, said in a news release early on Tuesday this week, about the committee hearing, that the Insular Cases, are “grounded in racial discrimination that established a doctrine of ‘separate and unequal’ for residents of U.S. territories.”

The group’s founder and president, Neil Weare, also testified during the hearing, in support of the measure, which seeks to reject the Insular Cases as both contrary to the US Constitution and for their racist underpinnings. Weare is part of the legal team and advocate for three American Samoans living in Utah, seeking to be declared US citizens.

House Natural Resources Committee Chair Raúl M. Grijalva (D-AZ) said in a statement prior to the hearing that the Insular Cases “belong to a very dark chapter of U.S. history when the doctrines of ‘separate but equal’ and attitudes about racial inferiority explicitly defined the country’s laws.”

“We cannot erase this harmful past, but as legislators, we have an obligation to ensure that its legacy does not extend into the future,” he said.

While the measure is “well-intended and perhaps, in some circumstances justified, it is a blunt instrument that will not only hasten the destruction of unique cultures within U.S. Territories and Insular Areas, it will destroy the right of the people of American Samoa to democratic self-determination,” he said in written testimony provided ahead to the committee.

The former attorney general pointed out that currently people of American Samoa “have a degree of self-determination and have a voice and a way of protecting our culture and way of life. This arrangement preserves our traditional Samoan way of life, or fa’a Samoa, including communal land ownership, cultural traditions like prayer curfews, and that most of our islands’ lands should stay in the hands of persons with Samoan ancestry.”

Unlike other US territories, he points out that persons born in American Samoa are not US citizens, but rather non-citizen U.S. nationals”. He said that in December 2019, U.S. District Court Judge Clark Waddoups with the federal court in Salt Lake City, Utah ruled that American Samoans should have birthright citizenship. (Samoa News notes that this decision is currently on appeal by American Samoa and the US State Department, at the Tenth US Circuit Court of Appeals.)

“This decision was made without our people in American Samoa voting on the issue or exercising our right to self-determination,” Talauega said, noting that US nationals currently have a path to U.S. citizenship, an expedited path if they leave American Samoa and reside in any of the 50 states.

He argued that ending application of the Insular Cases, as proposed in HR 279, may well be the correct course for some territories. And that could include territories that have democratically self-determined that the status of the people under the law of the Insular Cases is intolerable, and must end immediately by legal mandate without agreed terms or conditions that define a new status other than unincorporated territory.

“That is not the case for American Samoa,” he said, and explained that the territory has a voice through the local territorial government and a voice in Congress to inform and assist Congress in the exercise of its powers to provide for local self-government in the territories under Article IV, Section 3, Clause 2 of the U.S. Constitution.

Talauega then delivered what he said is, “Our voice and our message is extremely clear: We want any change in our political status and rights under federal territorial law to be decided by elected leaders in the local government, our people and our elected representative in Congress and fellow members of Congress, not by unelected federal judges who we have no voice in nominating or confirming, who handed down the Insular Cases the last time Congress deferred to the courts on the question of political status of territories in 1901.”

Accordingly, he said American Samoa supports the intent of the resolution to repudiate the expression of racist attitudes by justices of the U.S. in the Insular Cases.

“However, we believe all lawsuits and cases in the Federal courts in which the actual law of the Insular Cases is being challenged should be decided on the merits consistent with the U.S. Constitution, law evidence, and facts presented in court,” he said.

According to the lieutenant governor, this is “imperative and critical for American Samoa because of pending litigation in which the [federal] courts are being asked to change the political status of the people of American Samoa under Federal law, without local democratic self-determination supporting outcomes of litigation that are unpredictable and/or unwanted.”

He reiterated that American Samoa has “no objection to repudiating the racist and immoral views adopted in the Insular Cases” and joins other territories in doing so.

However, he said that what “we oppose is the wholesale rejection of these cases because we believe such an action will have a lasting impact on the underlying structure of our political relationship with the U.S. – the right of self-determination and consent of the governed.”

He also told the committee that each territory is unique, and any new legislation should recognize the history of the individual territories and their relationship with the U.S. and Congress.

However, a "one size fits all” approach will not work, he said. For American Samoa:

•           We are the only one of the five insular territories that did not come under U.S. sovereignty as a result of conquest or sale by a European or Asian power;

•           We are the only territory that controls its own immigration and customs systems;

•           We are the only territory that selects part of its legislature through customary means;

•           We are the only territory that prohibits the alienation of most of its lands;

•           We are the only territory whose residents are not automatically U.S. citizens at birth and prefer to keep it that way.

• We believe being patriotic non-citizen U.S. nationals is not a second-class status but a unique first-class status. Despite not being U.S. citizens, American Samoa has the highest enlistment rate [per capita] in the U.S military of any of the states or territories.

Written testimony of all witnesses and other information is available on the committee’s website [https://naturalresources.house.gov].