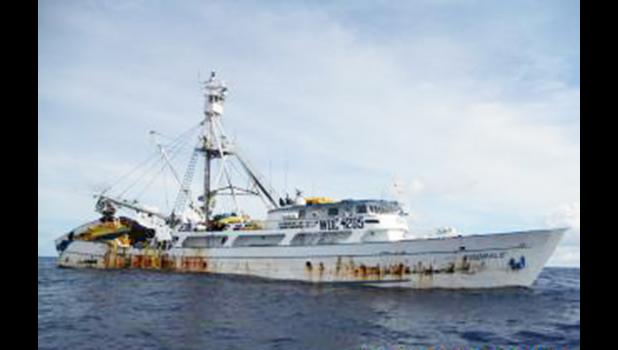 Pago Pago, AMERICAN SAMOA — Owner of the US flaged purse seiner vessel F/V Koorale, which supplies fish for the local cannery, has filed a multi-million lawsuit at a Florida federal court against the owners of another US purse seiner, American Eagle, over an incident that occurred more than 1,000 miles from Pago Pago last year.

M & F Fishing, Inc., a Nevada corporation, filed the complaint more than a week ago at the federal court in Tampa, seeking $20.5 million in property damage and consequential economic harm arising from a June 17, 2019 collision on the high seas, which the plaintiff alleged was caused by American Eagle, which “struck the Koorale' s port side bow quarter at full or near full speed, causing the Koorale severe damage.”

The complaint — against defendants American Eagle Fishing LLC, a Florida based company and its affiliates — states that both vessels operate in and out of American Samoa, based on US Coast Guard documents. And the alleged collision occurred about 1,500 miles northeast of American Samoa.

On the day of the collision, the Koorale had been at sea fishing for approximately 18 days and “had been reasonably successful in her catch to that day, having caught approximately 400 metric tons.” The vessel had onboard a crew of 18 plus a NOAA Fisheries Observer.

The complaint outlined the plaintiff’s side of its story, stating in part that it was a clear day with good visibility. The Koorale crew could see numerous other fishing vessels in the vicinity, including the American Eagle, American Victory, Sandra C, Cape Ferrat, Cape Finisterre, and Cape Breton.

Plaintiff also detailed what happened on that day leading to the collision when the Koorale and the American Eagle both headed towards a school of fish.

Plaintiff alleges that American Eagle struck the Koorale and American Eagle’s blow caused severe damage to the Koorale's hull, machinery, equipment, and supplies as a result of the collision, which was then reported to the US Coast Guard, which conducted an investigation.

“On information and belief, the American Eagle's conduct resulting in the collision was carried out with intent to damage the Koorale and/ or to intimidate the Koorale off of the fish she was tracking and over which she had priority per the Group Code,” the complaint alleges.

It further alleges, that because the American Eagle, could clearly see the Koorale's position at all relevant times, her act of continuing to sail directly at the Koorale's port side at full or near full speed without taking any apparent evasive action was carried out recklessly, wantonly, and with callous disregard of the safety of the Koorale and her crew.

The Koorale was able to return to Pago Pago to unload its 400 metric tons of tuna at the StarKist Samoa cannery, about 24-hours after the collision at sea. After necessary repairs were made in Pago Pago, Koorale sailed to Port Nelson, New Zealand, to further assess the damage and complete permanent repairs, which remain underway.

Having repairs done in a New Zealand — a foreign port — was because the “American Samoa shipyard is currently defunct” and other US options are limited and distant, according to a footnote in the complaint.

The defendants are expected to file their response soon.