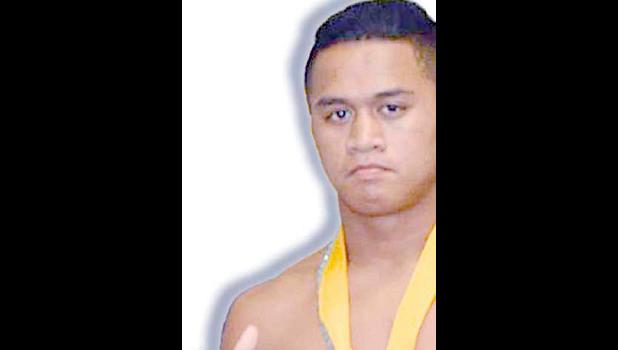 Pago Pago, AMERICAN SAMOA —  A young elite boxer, who won gold medals for American Samoa in May this year in international competition, is now in custody on the allegation that he assaulted a female student on school campus by dragging her inside a vehicle, beating her and ripping her clothes.

(Samoa News points out that Togo’s first name is Jeffrey on the boxing roster for the international competition where he won gold medals.  His first name is spelled Jeffery in the court affidavit, which is used in this court story.)

Tago is charged with one count of felonious restraint involving domestic violence and one court of attempted kidnapping involving domestic violence, both class C felonies, punishable by a term of imprisonment of up to seven years, a fine of $5,000 but not less than $150 pursuant to A.S.c.a. 47.0402, or both, and two class A misdemeanor charges of 3rd degree assault and endangering the welfare of a child.

If he posts bond, the court orders Tago to stay away from the victim and not attempt to contact her or her family in any way ad even if he encounters her in public, he is to walk away from her peacefully.  The court also ordered Tago not to set foot on the Tafuna High School compound at anytime.

The government claims that on the morning of Oct. 29, 2019, a teacher from THS contacted the Tafuna substation and requested police assistance regarding a young male individual who came uninvited on to the THS campus and allegedly assaulted a female student by dragging her into an unknown white Toyota Four Runner in an attempt to kidnap the female student, ripping her clothes and physically beating her.

The teacher told police, who responded to the call, that after the victim was freed from Tago, she then saw Tago take off running and was picked up by the driver of another vehicle (license plate #3584), driving off towards the airport and making a right turn heading west, going past the Army Reserve compound.

Police were informed by students that the victim was making her way to the Tafuna Substation to file a complaint against Tago.

Police then returned to the Tafuna Substation and were able to meet up with the victim and her male cousin, who accompanied her to the police station.

The victim told police that it was at that very moment after her little sister told her about Tago when she saw Tago walk straight onto the school campus and approach her angrily. Raising his voice, he took her backpack, and allegedly dragged her inside a white four-door 4-Runner vehicle that was driven by his friend known as “Jamson”.

According to the government, the victim said she tried very hard to fight back by pulling her hand back but Tago was too strong and at one point, Tago allegedly forced her by carrying her and then allegedly threw her inside the vehicle.

When the victim was inside the vehicle, Tago started assaulting her by allegedly choking her neck, shaking her and grabbed the front of her shirt and forcefully held her down inside the car. She said Tago rested for a moment before continuing to repeatedly punch her in the face, while she raised both hand with palms outward to cover her face.

She said Tago’s punches struck the palms of her hands. She said that while Tago continued with the assault, she saw several students run towards the car and try to open the doors, but they couldn’t because the doors were locked.

It was at that time when the students started stoning the car and that’s when she was able to reach and unlock the door and escape.

The victim told police she heard Tago yelling at the driver to take off because the students were stoning the vehicle. The victim was escorted to the main office by other students and a teacher.

The victim’s little sister and her friend witnessed the alleged incident, and were interviewed by the police.

The sister confirmed the victim’s account of the incident, including the role she played rescuing the victim by stoning the vehicle with friends, while it was slowly moving, and her helping the victim to get out of the vehicle.

Finally, all the teachers that were nearby noticed the commotion and came out and tried to help them, the sister said, and that’s when Tago jumped back into the car and left with his friend.

The victim’s sister told police this is not the first time this happened, that Tago forced her sister (victim) to go with him. Whenever the victim tried to break up with him (Tago), he would beat her up and she would come to her with bruises on her body.

The sister would ask the victim who did this to her and she was would say that it was Tago. However, the sister told police that what happened during this incident was the worse.