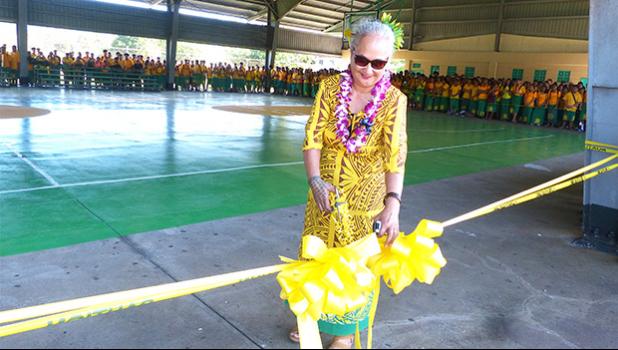 The school has been without a basketball court since its gymnasium was completed in 2014 by PRIMO Builders.

Throughout the past five years, Leone HS students who played on the varsity and junior varsity basketball teams, along with their coaches, would have to search for any indoor basketball court that was available for use.  Sometimes, they were able to use the ASCC gym, St. Theresa Elementary School gym, and also the Tafuna HS gymnasium.

To address the longstanding problem, Rep. Samoa used her Fono allowance to fund the project, which took two weeks to complete.

She said she learned about the need for a basketball court in 2016 when one of the village coaches “informed me that Leone High School students are deprived of ... a basketball court. And again in 2018, I was reminded by one of the youth leaders, who volunteers to coach the girls varsity and junior varsity teams, that they are having a hard time looking for an indoor basketball court.”

“The new Leone HS principal Patrick Danielson was persuasive in making me feel the need of urgency for the students not to wait another year without a basketball court,” Samoa said.

House Speaker Savali Talavou Ale brought the issue to Public Works’ attention. PRIMO Builders had volunteered to install the basketball court 3 years ago, if the materials and supplies were provided — which is what Rep. Samoa did.

The work started Thursday, Aug. 29th and was completed Thursday, Sept. 12th. PRIMO Builders has committed to properly designing the volleyball court as well. Rep. Samoa expresses appreciation to the many who contributed to the completion of this project.

When asked what her next project will be, utilizing her Fono allowance, Rep. Samoa said there’s some serious road/ sidewalk projects in her village, in addition to ukulele, sewing and other empowerment programs.