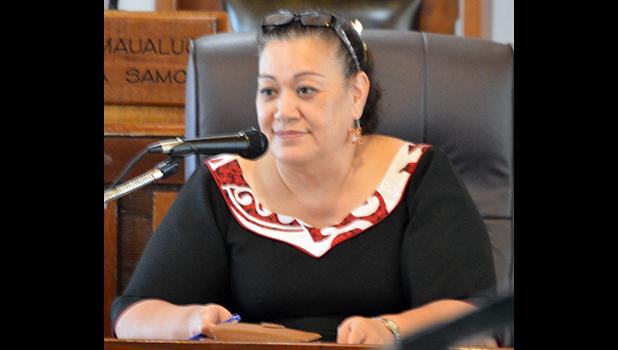 Pago Pago, AMERICAN SAMOA — The House of Representatives last Friday approved the governor’s nomination of Mitzie Jessop Taase as Attorney General (AG) of American Samoa. The unanimous vote by the House of 16-0 was cast just before the Fono took a two-week break. Jessop Taase is now cleared to serve as the first female AG.

Jessop Taase was rejected twice by the House before her name was resubmitted to the Fono last month for reconsideration by Gov. Lolo Matalasi Moliga.

In resubmitting Jessop Ta’ase’s nomination to the Fono, Lolo said that she has faithfully served the territory for many years and has most recently capably served as Acting AG during these trying times

“This is in addition to the great contributions she has made working as legal counsel in two branches of the government.”

According to the Governor, Jessop Taase’s experience and leadership are vital to ensuring ASG meets the challenges facing our territory through the rest of this administration.

The House also approved Tialuga Vince Iuli as the new director for the Office of Public Information-KVZK-TV with a unanimous vote of 16-0.

The decision to approve Tialuga came after a confirmation hearing was conducted in the House Government Operations committee one week prior to their vote last Friday.

In his letter to Fono leaders last month, Lolo said that Tialuga is well versed in the management and operation of OPI. As deputy director of the office since June, 2013, he was responsible for building up the staff through workshops and seminars to ensure that employees had the proper skills to execute its mission.

This was in addition to his many other administrative and strategic responsibilities within OPI. Tialuga has performed admirably in previous public services positions as the Governor’s Press Officer and as marketing specialist at the American Samoa Telecommunications Authority.
The Senate confirmed Tialuga by unanimous vote earlier in the week.

There has been no mention of any vote scheduled for Jessop Taase or Tialuga nor was it discussed by members of the House and it came as a surprise that the confirmations of Jessop Taase and Tialuga were even on the calendar.

Some lawmakers had told Samoa News previously that the confirmation of the two nominees would be delayed until the House returns from their two-week break.

The Fono is taking a two-week recess after last Friday’s session to await the submission of the Fiscal Year 2021 budget. Both the House and Senate approved concurrent resolutions yesterday authorizing the recess. According to the concurrent resolution, lawmakers will reconvene on Monday, August 24.

The Senate has confirmed members to the Board of Voter Registration and Campaign Spending Commission.

Confirmation of these election boards require only Senate approval.

The Senate approved each Board member by a unanimous vote of 16-0.