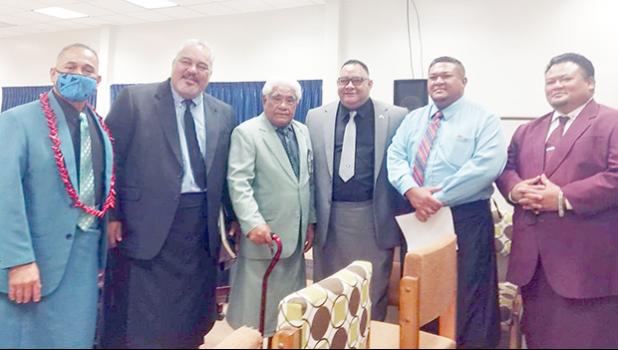 Pago Pago, AMERICAN SAMOA — Despite a lot of criticism before his confirmation hearing, the House of Representatives has given the green light to Muavaefaatasi John Suisala to serve in the Lemanu and Talauega cabinet after they approved his nomination as Director of the Department of Human and Social Service last Friday. The vote was 16 to 1.

After the vote, chair of the House Human and Social Services Committee, Rep. Su’a Alexander Eli Jennings thanked faipule on Thursday morning. Tuala-uta Representative Samuel Meleisea acknowledged the support shown by the Speaker and members of the House for the director nominee.

He said while Muavaefaatasi is a matai of Pago Pago, he and fellow Tuala-uta faipule Larry Sanitoa must express their thanks for the vote of confidence for one of their constituents.

The Tuala-uta faipule referred to the allegations, which surfaced ahead of Muavaefa’atasi’s confirmation and expressed his appreciation that members did not take them into account but considered the long and honorable service of the nominee to the people and government. Meleisea was referring to documents that were distributed to House members last Friday pertaining to grants received by a non profit organization with whom the director was affiliated.

The Aua faipule, Faimealelei Anthony Allen also referred to the allegations when he thanked House Speaker Savali Talavou Ale for his leadership and counsel during a difficult week.

He said the confirmation of the DHHS director was not an easy task and they were criticized by constituents. He said members overlooked the criticisms and heeded the Speaker’s advice to remember the reason why they were elected to the House. He told the Speaker that their calling is more important than anything else.

Muavaefaatasi will appear before the Senate Human and Social Services Committee next week.

Muavaefa’atasi’s confirmation hearing before the House Human and Social Services Committee lasted just over 20 minutes and started with the chair giving the director nominee an opportunity to highlight some of the services and programs that DHSS provides.

Muavaefa’atasi said that DHSS’s main product is service for the community and their goal for the next four years is to improve and expand their services for the territory.

He spoke about short term priorities for DHSS before Vice Speaker Fetu Fetui interrupted saying Muavaefa’atasi need not elaborate on the work he has done because members of the House are already aware of his achievements.

He suggested that Muavaefa’atasi return to the chamber in the future to discuss the various programs and services of DHSS.

There were no questions asked of the acting director.