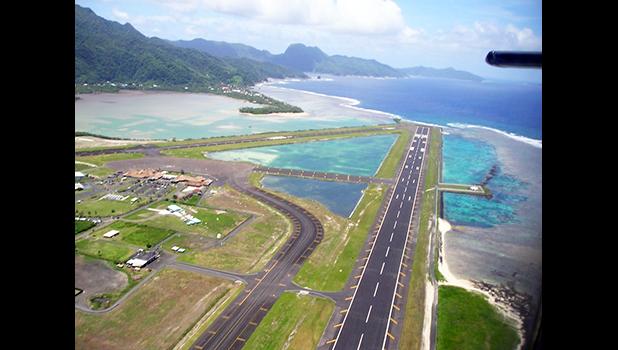 Pago Pago, AMERICAN SAMOA — Hawaiian Airlines will be reverting back to its regular schedule early next month, now that the Instrument Landing System (ILS) is back in service at the Tafuna airport.

Hawaiian retimed its Pago Pago flights to arrive and depart during daytime hours on Tuesdays and Fridays, as well as the third weekly summer flight, because of safety reasons, as the ILS was not operational.

As previously reported by Samoa News, the US Federal Aviation Administration installed last month new antennas for the ILS, and this was followed by a flight check. However, FAA learned that it was still not operational and dispatched on May 29th a crew of technicians to the territory.

FAA spokesman Ian Gregor told Samoa News the ILS passed the flight check on Friday and is back in service.

This was also confirmed by Hawaiian spokesperson Ann Botticelli yesterday, saying the ILS was back in operation this past weekend and this “means we can revert to our regular schedules.”

“Because we want to ensure that our guests traveling through the week of July 4th can do so as planned, we will return to our previous schedule on July 11th,” she said yesterday from Honolulu.

“This has the added benefit of giving us time to contact those who have booked travel on the temporary schedule between July 11th and July 27th — the day we were set to return to the original schedule,” she said, adding that to “help with the transition, we will run two flights to Pago Pago on July 10th.”

Hawaiian “guests” should know that on Tuesday, July 10, Hawaiian will operate the following two departures from Honolulu and Pago Pago as it transitions to the original schedule the next day:

“We are contacting via phone or email all guests booked on our flights between July 11 and 27 to notify them of the change and provide any necessary travel assistance,” Botticelli said.