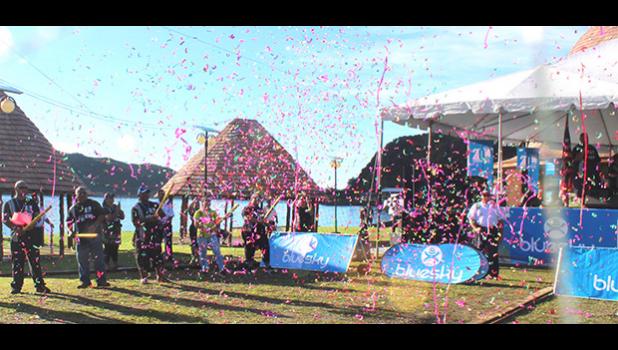 Pago Pago, AMERICAN SAMOA — Confetti in the air, fired off by some members of Team Bluesky (far left), this past Saturday morning during the Bluesky Summer Bash, to publicly celebrate the company’s 20th anniversary.

The event was hosted at Su’igaula o le Atuvasa Park in Utulei. (The actual, official 20th anniversary was recognized on July 10th at the company’s Laufou headquarters).

The Summer Bash kicked off at 8 a.m. with an invocation by Monsignor Viane Etuale, who was among the VIPs when Bluesky was launched two decades ago. According to him, there were skeptics at the time, scoffing at a company providing only cellular phone service, saying it wouldn’t last.

But, he added, since then, Bluesky has grown and expanded to other telecommunication services not only in American Samoa, but also in Samoa, the Cook Islands, and New Zealand.

He credited the company’s “human resources” — employees — for their dedicated, hard work over the last 20-years and wished Bluesky another 20 years and beyond. There was applause from the crowd, when he called on the company’s workforce to continue to turn the “gray sky” to “blue sky”.

In her remarks, Bluesky customer service manager Sherry Sele said Bluesky has expanded locally over the years, providing cell phone and internet service, various cell phone products, and was the first to bring undersea fiber optic cable to American Samoa. (Sele was referring to the American Samoa Hawai’i Cable LLC, which is 33% owned by ASG.)

Also mentioned was Bluesky’s continuous service to the territory — the community and government. The company continues to expand, with more to come, including “television,” she said, and quickly admitted to “letting that one out of the bag.”

It’s unclear what “television” Sele was referring to, but Samoa News notes that Bluesky owns and operates the only cable TV service on island — Bluesky Moana TV.

After the formalities, the Summer Bash kicked off with entertainment, and games for children. There were food booths, game booths, a floating water park, as well as a special performance by Polynesian superstar “Fiji”.