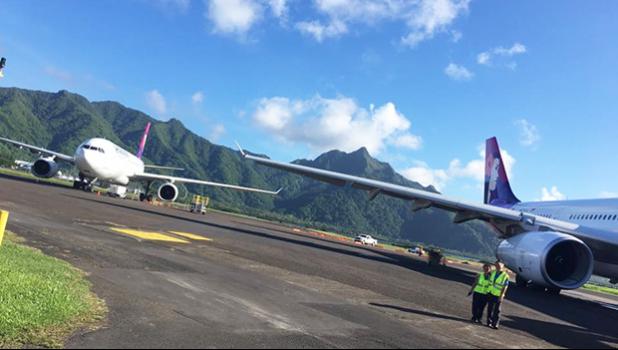 The airline’s two aircrafts on the tarmac yesterday attracted much attention.

“About five hours into the flight, a cockpit light indicated a possible malfunctioning component,” Da Silva said yesterday afternoon from Honolulu. “Out of an abundance of caution and in accordance with safety regulations covering extended-range operations (ETOPS), the flight crew diverted the Airbus A330 aircraft to Pago Pago International Airport to have the issue inspected.”

Da Silva said the flight landed in Pago Pago without incident at 5:05 p.m local time. “We deeply apologize for the inconvenience to our 215 guests, who were provided meal vouchers, hotel accommodations, and a US$500 travel certificate,” he said.

The airline ferried a separate aircraft from Honolulu to Pago Pago overnight “to minimize the delay to our guests,” he said, noting that the replacement aircraft — with passengers and crew — departed Pago Pago around 9:05a.m yesterday and was to arrive in Sydney at 12:57p.m (Sydney time.)