Governor Lolo looks at coronavirus testing for 20% of the population 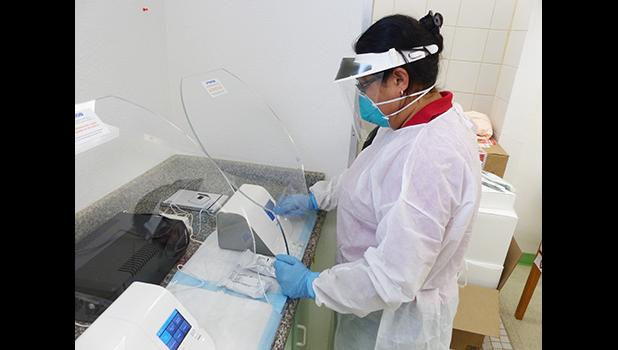 Professionals believe 20% would be a waste of kits, opting for 2%
By
Fili Sagapolutele
fili@samoanews.com

Pago Pago, AMERICAN SAMOA — With 25,000 coronavirus test-kits received by the hospital, Gov. Lolo Matalasi Moliga has instructed the LBJ Medical Center and Health Department officials to come up with a policy plan for community-based testing of 20% of the population.

For American Samoa, he says that DoH and LBJ are “very confident — 99.9% confident, the virus is not circulating locally” after collecting and testing 172 samples — 108 from LBJ and 63 from DoH — which all came back negative as of May 24th.  He said 17 samples were tested within a 24-hour period.

Of the total 172 samples, 145 of them were tested at DoH and the samples tested so far include first responders and DoH has now started continued testing of first-responders, to be followed by healthcare workers.

Responding to follow-up questions from the governor on the current number of test-kits on hand, Health director Motusa Tuileama Nua pointed out that at least half of the test-kits are reserved at this point in the event there is a case on island and there are also test-kits set-aside for the ongoing testing of first responders.

Lolo asked LBJ about the number of test-kits it has on hand, to which hospital chief executive officer Faumuina John Faumuina revealed that they have just received 25,000 test-kits for the ABI-7500 Real Time testing machine, which is on island, but construction of the specialized negative pressure room to conduct testing was waiting other parts — including controls and exhaust fans —that just arrived on last Friday’s cargo flight.

Faumuina explained that the US Army Medical personnel assigned to LBJ would be conducting training this week with the hospital staff on the machine. And once it’s operational, LBJ can help with testing of first responders and meanwhile another order for more test-kits has already been made.

Lolo, who wants 20% of the population tested, told DoH and LBJ officials that this is “our biggest issue right now” — getting people tested with what’s available now on island.

“For us to get a better handle on the virus, we need to test more people. We need to find a better way to move the testing forward,” he said.

According to the governor, he has written to Robert Fenton, the Region IX administrator of the US Federal Emergency Management Agency (FEMA) telling him that American Samoa needs 20,000 test kits to test 20% of the population.

Fenton responded saying that the federal government’s calculation for distribution of test-kits is based on the population count, and for American Samoa, testing is 2% of the population — not 20%, according to the governor.

But with the 25,000 test-kits with LBJ, the governor said it’s best that a plan be prepared and submitted to him on using these test kits so that testing of 20% of the population can begin as soon as possible.

Lolo suggested ordering all first responders to get tested now with the 2,700 plus on hand at DoH, followed by health care professionals.

LBJ chief medical officer Dr. Iotamo Saleapaga explained that the hospital has a plan in place for use of the 25,000 test-kits once the test-machine is operational. The plan includes testing all patients currently in the hospital as well as medical staff and those visiting the emergency room. He suggested that DoH deal with testing of the community at large as well as police and fire fighters — who are also first responders.

However, the governor insisted that LBJ’s test-kits should be used now for testing 20% of the population instead of waiting for DoH to get more test-kits. He recalled during the measles outbreak that ASG had to purchase $700,000 shots instead of waiting for the federal government, in order to keep the measles from spreading further in the community.

Dr. Fred Uhrle of the local federal VA Clinic noted that the testing that “we’re doing now is to test for the virus itself. If the virus were on island, even with the high risk population on island, we would have seen cases at the hospital. So far we have no virus.”

“So testing 20% of the population is a waste of test kits. If and when we re-open our borders and we import the virus that’s when we’re going to need the test kits to test the population of sick patients,” he said, noting that health officials are “going to need as many test kits to track the patients or people who may have been in contact with that person of interest (the sick patient).

“So I think it’s useful if we want to test one-to-two percent of the population but to test 20,000 people, it’s a waste of test kits that we have,” he said, and quickly added, “with all due respect” to the governor.

Lolo, however, still insisted that health officials come up with a policy-plan on testing 20% of the population using LBJ’s current test-kits. “It’s important that more people are tested to help physicians with their decisions moving forward,” he said.