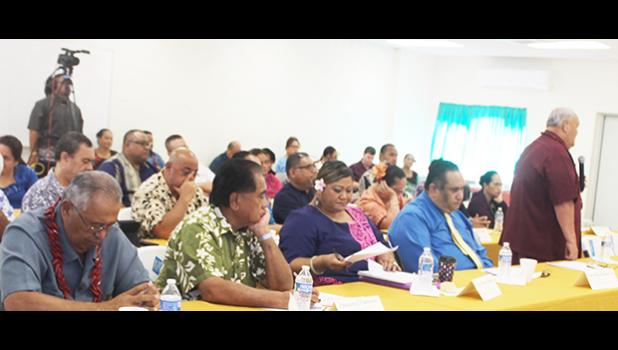 For example: Out of 2,000 ASG teachers, fully 1,800 not vaccinated
By
Fili Sagapolutele
fili@samoanews.com

Pago Pago, AMERICAN SAMOA — Not yet half of the Executive Branch workforce of just over 5,000 employees have been fully vaccinated, according to the Human Resources Department (DHR) report presented at Monday’s cabinet meeting, where it was also revealed that more than 1,000 teachers have not been vaccinated raising concerns as the government launches it’s mass vaccination drive today, with the focus on students, especially the age group of 5 to 11 years old.

Provisions of the current COVID-19 Emergency Declaration require all Executive Branch employees to be fully vaccinated by Dec. 15th and reports are to be submitted to DHR which is charged with providing a status report.

Exceptions to the vaccination requirement, according to the declaration, will only be permitted as required by law. And “reasonable accommodation” may be provided to employees who communicate in writing to DHR that “they are not vaccinated against COVID-19 because of a disability pursuant to the [federal] American with Disabilities Act... or a valid medical reason or because of sincerely held religious belief, practice or observance.”

During the cabinet meeting, Human Resources director, Lynn Pulou-Alaimalo provided a very brief verbal presentation, saying that the Executive Branch’s total workforce stands at 5,019 employees and of that total, 1,931 employees have been fully vaccinated.

And that leaves 2,767 employees not fully vaccinated, she said, adding that a report has been submitted to executive branch directors on the status of their respective employees as well as employees who have requested in writing to DHR to be exempted from the mandate.

She also explained that the report for directors includes the number of employees with only one-shot. She said, many employees in agencies such as the Departments of Homeland Security and the Health Department have not been fully vaccinated.

Gov. Lemanu Peleti Palepoi Mauga informed the cabinet meeting that it’s a difficult task for the government to reach out to the public to get vaccinated when ASG hasn’t firmed up its commitment, as there are still more workers to be fully vaccinated.

However, the governor believes that a lot of data on vaccinations for departments and offices has not yet been submitted to DHR in order to complete the vaccination mandate report. He requested that executive branch cabinet members provide full reports to DHR before the end of this week.

ASG Treasurer Malemo Tausaga pointed to the report, which he says shows that there are about 2,000-plus DOE teachers, but those not vaccinated totals around 1,800. He questioned how the government is pushing the COVID-19 vaccine while there’s still a large number of teachers not vaccinated.

He agrees with the governor that the Administration should first look at itself before looking outside and pushing for the public to be vaccinated.

In response, the governor said he supports Malemo’s statement, saying that ASG, especially directors, should set examples for the public. He noted that ASDOE is one of the largest departments in government and is involved with children and this department’s director should further focus on this important issue — getting teachers vaccinated.

The governor then recalled for cabinet members that last Saturday on his way to the Veterans Memorial Stadium for the high school football game, he observed a large group of people along the side of the road, in front of the McDonald’s Restaurant, with signs opposing vaccination.

He called on cabinet members not to be swayed by others who have their own views and opinions on such an important issue that protects the health and safety of the community at large. He also acknowledged that there are those in the community who are against the vaccine, and they have a right to their beliefs.

However, he said, it’s the Administration’s belief based on local medical advice and views from the federal government that people are better protected from the virus if they are vaccinated. Like any other government in the world, he said it’s important that ASG protects the community — including children.

Samoa News reported on Monday this week that the local non-profit group, “Amerika Samoa Ala Mai” (ASAM) held a peaceful rally last Saturday in Tafuna, calling on the government to slow down with their plans for a vaccine mandate and give the community the opportunity to get answers to the many questions they’re asking, before making the decision whether to get the COVID-19 vaccine or not.

During the cabinet meeting, Lemanu urged directors to work on the vaccine reports that are to be submitted to DHR by the end of the week, saying that there are also issues with vaccination of Governor’s Office employees. He suggested that his acting chief of staff look into this matter.

The governor reiterated the importance of the vaccination to protect from COVID-19 and for directors to submit their full report on the mandate to DHR before the end of the week.

Other presentations at the cabinet meeting — which was aired by KVZK-TV on Monday night — included one from the Health Department on the mass vaccination drive, quarantine policy and the new COVID-19 variant called Omicron, that has raised concerns from the World Health Organization and the U.S Centers for Disease Control and Prevention.

Read also in this issue the latest national and international news reports on the new variant, which was first reported from South Africa, and since then cases have been identified in other parts of the world, including Australia.

Of interest: Local independent news outlets, Samoa News and KHJ news, were not invited to the cabinet meeting, with the governor’s office saying in an email to Samoa News on Monday afternoon that KVZK was present for “archival purposes” for the three-hour cabinet meeting, but a press release was forthcoming.  A similar email was send to KHJ as well.