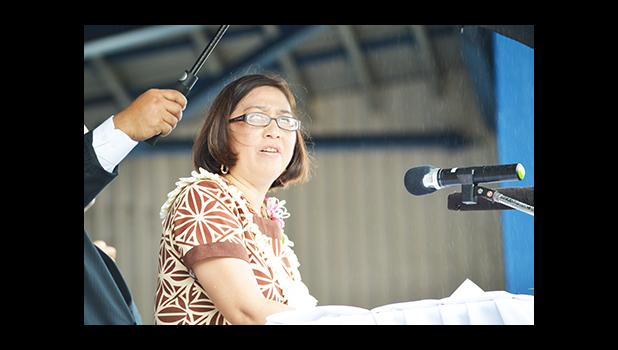 Pago Pago, AMERICANN SAMOA — Gov. Lolo Matalasi Moliga is currently in Honolulu attending meetings and will also attend the launch of the Hawai’i leg of the Hawaiki submarine cable.

This is the first time that the Governor has attended a “Council meeting because of new leadership with Esther Kia'aina becoming the Executive Director,” said Iulogologo last Friday afternoon responding to Samoa News inquiries.

Kia’aina, who served as US Interior Assistant Secretary for Insular Areas under the Obama Administration from 2014-2017, took over the Executive Director post a few months ago. During her USDOI tenure, she visited American Samoa and was also bestowed the Samoan title, Lupesinaasamoa during her visit.

Iulogologo explained that under Kia’aina’s leadership the US Economic Development Administration, approved a grant to fund the operation of the PBDC with potential available funding to address economic development projects proposed by Hawai’i and the US territories of Guam, Commonwealth of the Northern Mariana Islands and American Samoa as documented in the recently completed Territorial Comprehensive Economic Development Strategy.

“The Governor's presence demonstrates American Samoa's renewed commitment in the organization, which the Governor had lost confidence in under the old leadership,” Iulogologo explained.

“With American Samoa's economic challenges caused by obstructive federal laws which also apply to the other Territories; collectively addressing these federal policy constraints might be more effective than going it alone,” he said. “With the involvement of Hawai’i, its Congressional Delegation working collaboratively with our representative could champion the efforts to eliminate these economically stifling laws.”

The three US Pacific territories and Hawai’i are members of the Council, which was established by governors and these same US Pacific jurisdictions in 1980, as a non profit group that advances economic and social development in the Pacific islands.

While in Honolulu, Iulogologo told Samoa News, the governor would also have the chance to meet with Hawaiki chief executive officer Remi Galasso at the launch of the Hawai’i leg of the Hawaiki cable. Lolo and Hawa’ii Governor Ige were both invited by Hawaiki to participate in the launching ceremony.

No specific date was given for the Hawai’i leg launch while the American Samoa branching unit — which cost $29 million, an investment by the ASG Employees Retirement Fund — was launched on July 19 this year.

“Our investment and aggressive participation in the Hawaiki Cable system reflects our efforts to diversify our one industry economy,” said Iulogologo. “Our fishing industry is facing significant uncertainties again because of federal policies.”

For example, he pointed to the federally mandated 40 cent per hour minimum wage hike that is effective the end of this month; federal 30(A) Tax Credit has lapsed; fish grounds have been reduced; environmental issues compelling new investments; China domination of the fishing industry negatively impacts competitive advantage; insensitive enforcement by the US Coast Guard; fishing permits becoming cost prohibitive; and others.

Iulogologo said the governor also has “other meetings which are of significance to our economic development future. The meetings will be revealed when they are completed due to their sensitive nature.”

During last Friday’s FY 2019 budget hearing to review the Governor’s Special Programs, it was the governor’s chief of staff Fiu J. Saelua who informed lawmakers that the governor left Thursday night and had send his regards to the Fono and a wish for a successful budget review process.