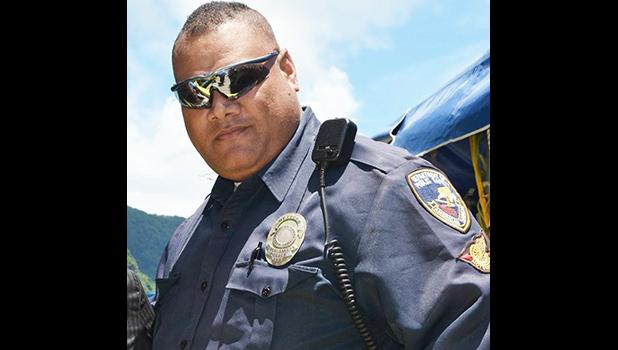 Out of the 2 criminal counts with which Lomu was charged, the jury found him guilty of criminal fraud, a class C felony; but not guilty of tampering with a witness, a class D felony.

Lomu didn’t react much when the verdict was read — after which he turned and shook hands with his defense attorney, Ryan Anderson, before exiting the courtroom and meeting with family members, who had come to show their support.

Chief Justice Michael Kruse thanked members of the jury for their hard work.

Meanwhile, Lomu, who was out on bond, is now in custody to await the day of his sentencing.

During closing arguments, prosecutor, Doug Lowe told the jurors that this is a simple case because the government presented all the evidence that can easily help them with their deliberations.

He drew the attention of jurors back to the morning of Aug. 12, 2018 around 3:30 a.m. when Chief of Police Foifua Foifua Jr called Lomu’s cell phone and instructed him to check Manu Lefatia’s cell to make sure he was inside his cell. And, told Lomu, “Call me back as soon as possible.”

Lowe said, “Lomu never called back Foifua Jr, because he knew that inmate Lefatia was not inside his cell … and he needed to do something to make sure Lefatia would not be in trouble.”

According to Lowe, Lomu was charged with two criminal offenses;  tampering with a witness and criminal fraud.

TAMPERING WITH A WITNESS

For the charge of tampering with a witness, Lowe pointed out that Lomu committed this crime when he instructed TCF officer, Viopapa Vitolio to do the changes to the TCF Log while standing behind her. And, out of fear — since Lomu was her boss — she complied with his instructions and made changes to the TCF log.

He also stated that Lomu did not want investigators to have the TCF log when they asked for the log on that morning; and in doing so, Lowe told jurors that this is a clear action of trying to withhold evidence from investigators.

The prosecutor also pointed out that not only did Lomu instruct Vitolio to change the TCF log, but he also visited her home 4 times during her family evening prayers, and called her on her cell phone 20 times, in an effort to induce her to stick to the story and plan.

According to Vitolio’s testimony, she was scared when Lomu kept calling her and even visited her home.

“These are not social calls, like, how are you doing today. These are threats calls, telling Vitolio to stick to the story and listen to what he said,” he told the jurors.

Another issue Lowe brought up to the jurors was Lomu’s statement to investigators that the reason the government filed this case against him was because DPS wanted him to be the “scapegoat”.

A “scapegoat” according to Lowe’s definition, is a person who is blamed for something that someone else has done.

Lowe stated that if Lefatia’s case goes to trial, his defense attorney will argue that Lefatia did not escape, he was there the whole night, from Aug. 11 to the morning of Aug. 12. Even Lomu told investigators that Lefatia was inside his cell the whole time.

But Lowe reminded the jurors of former officer Junior Kuka’s testimony, where he stated that Lomu instructed all three of them (including Toloa Koonwaiyou and Carter Soliai) to go to Lefatia’s cell and tell Lefatia that police are coming, and to make sure to get rid of anything that should not be in the cell.

“Lefatia is not stupid, he gave the officers 2 cell phones, and one of the cell phones was used to arrange the ride from the TCF to Leone to do the shooting,” Lowe said.

“So, we don’t know what other evidence was destroyed on that morning that can link Lefatia to the Leone shooting. All we know is that Lomu tried to cover up Lefatia’s criminal act. That’s why he’s not only the scapegoat but he’s also the main man,” Lowe said.

For the crime of criminal fraud, Lowe said that Lomu tried to cover up Lefatia’s escape by instructing Vitolio to change the TCF log. He also told his three TCF officers to inform Lefatia that officers are on their way to search his cell.

Defense attorney, Anderson opened his closing argument by telling the jurors that the government failed to complete their investigation from the beginning of this case until the day of trial; and they failed to present sufficient evidence to convict his client. He told jurors that their duty is not to find what allegedly happened but to find the real truth.

On the night of the alleged incident, Anderson said that Foifua Jr called Lomu and informed him that Lefatia had allegedly escaped from TCF and shot a man in Leone. He then instructed Lomu to check Lefatia’s cell.

Anderson reminded the jurors that Lomu never went to check Lefatia’s cell, it was the three TCF officers who went to do the job. Anderson also stated that Kuka followed orders that he thought were from Lomu, but they were all from Koonwaiyou.

“Lomu never instructed Kuka to search Lefatia’s cell, it was Koowaiyou who gave instructions to Kuka and Soliai. So, we haven’t heard from Koonwaiyou and we don’t know what Lomu told Koonwaiyou,” Anderson said.

Anderson stated that Vitolio is one of the co-defendants in this case. She was charged by the government with criminal fraud and tampering with public records. However, she entered into a plea deal with the government where she agreed to testify truthfully for the government against Lomu. For that reason, the government dropped the case against Vitolio.

Anderson also stated that Soliai and Kuka easily blamed Lomu for what happened and for that reason, the government never charged them.

The defense said that Lomu was never involved in the alleged escape of Lefatia. Lefatia escaped by cutting a hole in the fence and he left the TCF compound and allegedly shot a man in Leone.

When this incident happened, the Warden thought that he needed to blame somebody for what happened. The Police Commissioner also thinks that he will get in trouble about this case. That’s why he wants Lomu to be responsible for this incident, Anderson said.

“They wanted to blame Lomu to cover up Lefatia’s escape,” Anderson concluded.