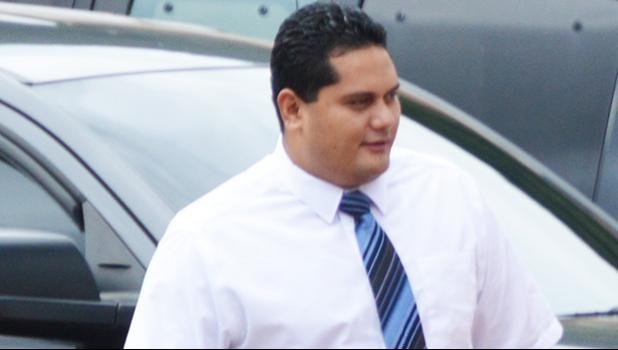 He told the court that others are involved but he ‘forgives them all’
By
Ausage Fausia
ausage@samoanews.com

In delivering his decision for Vincent Toeava last Friday morning, Chief Justice Michael Kruse said that it was difficult for the judges to find that Toeava was not fully aware about how serious his actions were, because he stated to the court that “I forgive them”, referring to his co-workers, whom he claimed are doing the same thing he did.

Toeava, who has been in custody since his arrest, unable to post a $450,000 surety bond, was represented by private attorney David Vargas, while prosecuting was Assistant Attorney General Laura Garvey.

Toeava is the son-in-law of the late DHSS director, Taeaoafua Dr. Meki Solomona. He was initially charged with 19 criminal counts of forgery and fraud, all felonies.

But under a plea agreement with the government, accepted by the court, Toeava, pled guilty to 2 counts of forgery, a class C felony, punishable by imprisonment of up to 7 years, a fine of up to $5,000 or both. In return, all the remaining charges were dismissed.

With his guilty plea, Toeava, admits that between 2017 and 2018 he altered food stamp coupons. The government recommended that Toeava pay restitution of $702,279.30 - the same amount that was recommended for co-defendant Liren Zhang, a.k.a Kevin.

Solomona begged the court for a chance to release Toeava so he can secure a job to care for his wife and two disabled children who are in Seattle, WA.

Toeava is the youngest of 4 sons, and his mother described him as an obedient, helpful, and loving person.

Kruse asked the defense attorney about the money that was involved in this case, whether he had any idea how the money was used. Kruse said a lot of things could have been bought with it. There was no response from Vargas.

Toeava could hardly speak, as he was in tears the whole time.  He said that in the 18 months he’s been in custody he has prayed for a second chance so he can prove himself to the world.

He apologized to his family and said he has failed as a father, and he also apologized to the ASNAP recipients (American Samoa Nutrition Assistance Program) who were affected by his actions.

To his ASNAP co-workers, especially those who were involved but have not been brought to justice, Toeava said, “I forgive you all”. He said he can’t control the court’s decision, but he wants everyone to know that he’s truly remorseful and he takes full responsibility.

Vargas asked the court to adopt the Probation recommendation for a probated sentence, and consider work release so he can find a job to provide for his family.

Vargas said his client’s family is facing a hard time right now, and Toeava needs to step up to do something. He also asked that whatever sentence the court imposes, that the two will run concurrently.

Kruse told Vargas that he didn’t hear anything about restitution, adding that the only thing the court is interested in, is how Toeava is going to pay back the ASNAP money. Kruse reminded Vargas that co-defendant Kevin in his plea deal with the government, not only agreed to testify against Toeava, but he also closed down his two stores so he can pay full restitution.

Kruse said there are a lot of people in the community who rely on the ASNAP program to feed their children. He pointed to the Pre-Sentence Report (PSR) in which Toeava told Probation that everyone at ASNAP can print out their own coupons. For that reason, the court believes that ASNAP cannot control its actions.

Kruse said that according to the government, the money involved in this scheme was about three-quarter million, and the court wants to know where that money went. The Chief Justice said the court is concerned that the feds will come down and pull this program out; and when that happens, many families in the community will suffer.

He said the court wants to know how the defendant is going to pay restitution, and whether he has any assets. According to Kruse, this huge amount of money can buy many cars.

Vargas said his client doesn’t have any assets.

Kruse fired back and asked, what Toeava did with all the money.

Vargas said that according to Toeava, the other half went to co-defendant Kevin.

Prosecutor Garvey echoed the defense submission and asked for a probated sentence and restitution. However, she opposed the request for work release.

Garvey said Toeava has a pending case with a set bond of $20,000 and therefore, he cannot be allowed on work release.

Before the judges deliberated on their decision, Kruse said that what caught his eye from the PSR is that Toeava told Probation that he’s not the only one involved in this scheme.

Kruse sentenced Toeava to 7 years in jail for each count. The sentences will run consecutively, which means Toeava will serve 14 years at the TCF.

The case against Toeava surfaced following a quick review of what caused the depletion of ASNAP funds for the first quarter of fiscal year 2018 (Q1 2018). Excessively high amounts of counterfeit ASNAP food coupons were being redeemed by three authorized retailers during this period, of which co-defendant Kevin owns two.

Toeava was a DHSS ASNAP Retailer/ Redemption Officer at the time.

The scheme began during October 2016, when Toeava approached co-defendant Jane Vasa and coaxed her into giving him blank Food Stamp printing paper, under the pretext of ‘using it to generate capital’ for the purpose of starting a business wherein she would be a partner.

In September 2017, Toeava involved Kevin as the retailer that would deposit ‘altered’ (or forged) coupons for redemption, with a ‘50-50’ split of the money. Kevin went along with the scheme, after Toeava assured him that ‘Papa Meki’ would be notified.

Along with his brother Spencer, Vincent Toeava is charged in a separate case involving drugs allegedly found at the TCF last year.

It involves two straws allegedly found in a bottle of hair gel that had been given to an unsuspecting TCF officer by Vincent to be delivered to a female inmate.

A person described as Vincent’s “right hand man” told police that he helps package and distribute drugs in the TCF. For that case, Vincent's bail is $20,000