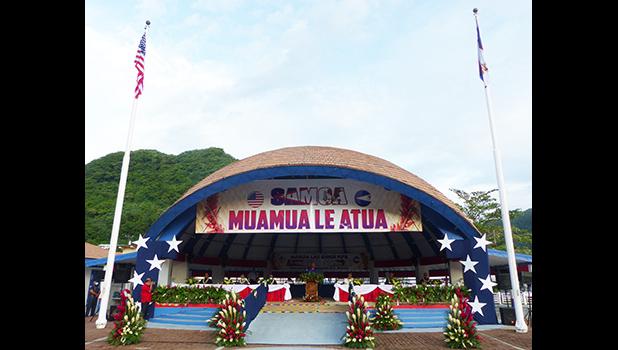 Pago Pago, AMERICAN SAMOA —The one-hour 2020 Flag Day ceremony, which got underway around 6:30a.m on Friday, Apr. 17th, was a small one for American Samoa with no fanfare or jubilant celebration, as the deadly coronavirus forced necessary preventive measures — especially social distancing, which was noted as very important by Gov. Lolo Matalasi Moliga during his last Flag Day address.

Lolo said the virus continues to claim lives, while new cases are confirmed worldwide, including in the United States, which currently leads the world in confirmed cases.

With no cure or vaccine to combat the COVID-19 pandemic, Lolo said leaders around the world have implemented necessary preventive measures — including social distancing, which is very important for all.

Social distancing protocol, says the governor is also a good lesson learned at this time when it comes to funerals and ceremonies to bestow a chiefly title. He says it’s usually the belief that such an event is successful when there is a large crowd of people.

He says these cultural events that take more than a week don’t result in praise for God — it just attracts praise for matai and families and is used by those in charge to enrich themselves.

Lolo recalled a funeral last Wednesday for an elderly lady from Faleasao where only a few people were in attendance and the funeral was simple, half-a-day and was very meaningful.

According to the governor, these changes were brought about by the virus and suggested that it should be followed going forward.

Lolo expressed much appreciation to the community, including church leaders, village leaders and others for supporting the government’s measures implemented already to protect American Samoa from this virus.

He acknowledged the support of the private sector, which the governor says has faced challenges during these difficult times with the loss of revenue due to restrictions implemented under the COVID-19 state of emergency.

According to the governor, social distancing is one of the two important issues that has come out of the COVID-19 pandemic. The other one is “stay home and save lives”, which is also important for families to stay together and spend quality time with each other.

He believes this has been lacking in the past with everyone working and no time to spend with family.

Lolo points to himself, as an example, saying much of his time is spent on government work. But he learned a lot during the time he was home-quarantined for two-weeks after he returned from Honolulu early last month.

During home-quarantine, Lolo said he spent time with family and children. Perhaps, he says, this virus reminds us of all the many other important things in life — family, to spend time with loved ones, especially the elders.

Besides the governor, a handful of government leaders in attendance marking the 120 years since the Deed of Cession, was Senate President Gaoteote Tofau Palaie, House Speaker Savali Talavou Ale and Secretary of Samoan Affairs Mauga T. Asuega.

Also in attendance was First Lady, Cynthia Malala Moliga, and US Interior Department field representative Lydia Faleafine-Nomura, who also read the English version of the governor’s 2020 Flag Day Proclamation while the Samoan version was read by Tapa’au Dr. Dan Aga, who heads the ASG Office of Political Status, Constitutional Review and Federal Relations.

Lolo explained that Chief Justice Michael Kruse was under the weather and unable to attend while Congresswoman Aumua Amata, was in Washington D.C. unable to return home for the celebration due to issues with incoming flights.

He also says that Lt. Gov. Lemanu Palepoi Sialega Mauga is in Honolulu attending to family matters. (Samoa News notes that Lemanu is among the local residents stranded in Honolulu unable to return home due to borders being closed.)

As this is the last Flag Day for the current Administration, Lolo said he and Lemanu decided on the theme for this year’s celebration, “Samoa Muamua Le Atua”, reminding everyone of the many blessings American Samoa has received from God.

In closing, he wished the people of American Samoa, as well as Samoans serving around the world in the US military, a happy Flag Day 2020.