Five contestants will vie for the Miss American Samoa crown 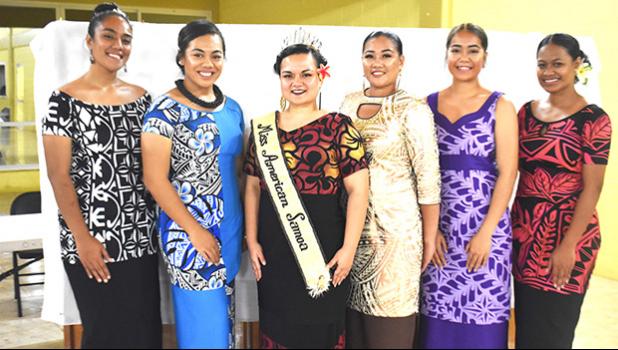 “Embrace, Empower and Endure”
By
B. Chen
blue@samoanews.com

Pago Pago, AMERICAN SAMOA — It’s that time of year again! When local beauties put on their best smile and compete for the honor of being the territory’s ambassador.

At this moment, Miss American Samoa Inc. (MASI) is gearing up for this year’s pageant, to be hosted at the American Samoa Community College multi-purpose center (The Fale Laumei — the usual venue — is currently closed and undergoing renovation work).

This year’s theme is “Embrace, Empower & Endure” and five contestants will be vying for the coveted crown next Friday, Sept. 27th at 7p.m.

This Saturday, Sept. 21st, the festivities kick off at 9 a.m with a float parade from NAPA in Tafuna to Aua village, and back to the Fagatogo Marketplace with there will be a brief meet-and-greet with the public.

Later that night at 6:30 p.m, there will be a VIP dinner hosted at Tradewinds Hotel to acknowledge the sponsors from the business community, followed by a meet-and-greet with the contestants.

Sunday, Sept 22nd at 9 a.m is a worship service with the reigning Miss American Samoa, Magalita Johnson, at her church — LDS Pava’ia’i Ward.

The week leading up to the pageant will be full of activities. The contestants will make brief visits with government leaders and partners, including First Lady Cynthia Malala Moliga, Hope House, LBJ Medical Center Pediatrics Ward, and fitness and health centers.

Pre-pageant interviews relating to selected topics will be held Thursday, Sept 26th at 10 a.m, at the Naumati Room at Tradewinds Hotel.