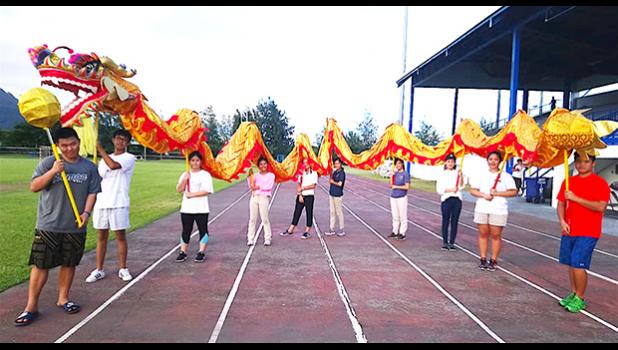 Pago Pago, AMERICAN SAMOA — Teens representing the Chinese Association of American Samoa were at the Veterans Memorial Stadium this past Wednesday, practicing one of the dances they performed during the 2019 Flag Day festivities, that kicked off at the Suigaula ole Atuvasa Beach Park in Utulei Friday at noon.

President of the local Chinese Association, Genhall Manu'a Chen told Samoa News that the group planned to perform a Chinese Dragon Dance, as well as a Chinese Fan Dance. In addition, they will be manning a booth that will feature exhibits and other information about their culture.

The 119th American Samoa Annual Flag Day Festivities will include a fireworks show Saturday night starting at 8 p.m. It is free of charge and everyone is invited.

Meanwhile, the group from Saleaumua, Samoa — who will be providing entertainment on Wednesday, April 17th at the Veterans Memorial Stadium — arrived in the territory Thursday morning via the Lady Naomi. They are being hosted at the DYWA Pago Pago Youth Community Center.

Samoa News understands that First Lady Cynthia Malala Moliga was scheduled to arrive to take part in the Flag Day celebrations. Governor Lolo Matalasi Moliga is still recovering in Seattle, WA and is unable to attend.