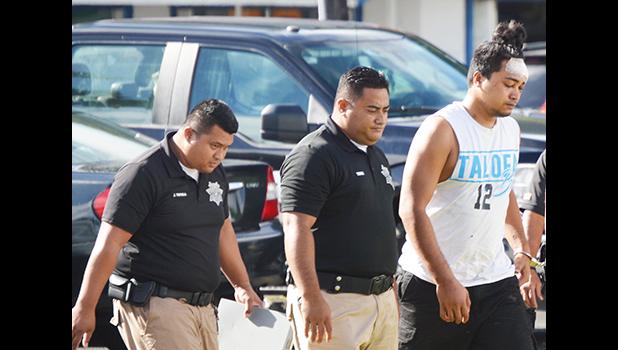 Lafua was charged with one count of driving under the influence of alcohol, a class A misdemeanor, punishable by a term of imprisonment of up to one year, a fine of up to $1,000, or both.

However, when Lafua’s case was called, he was served with the copy of an arrest warrant by a police detective, who is also the lead investigator in this matter.

During his initial appearance, Tauiliili-Langkilde set bail at $75,000.

If he posts bond, Lafua is ordered not consume any alcohol nor drive any vehicle while his case is pending. He shall surrender his travel document to his attorney, who will then hand them over to the government’s attorney to keep.

His preliminary examination hearing is scheduled for Wednesday, Dec. 22 at 9am.

While Lafua was making his first court appearance, a prayer service was being conducted simultaneously in front of the StarKist Samoa main gate, the location where the horrific car accident took place.

Over 100 employees gathered at the scene to pay respects and support for their co-workers who lost their lives unexpectedly.

A cannery official told Samoa News that the main purpose of the prayer service was for the employees to come together and mourn for their brothers who lost their lives.

Cannery officials advised employees to leave the matters to police and the court and let them focus on their parts.

Starkist Co. has also officially released the names of the 4 men who died at the scene of the accident. (See story elsewhere in today’s issue.)

More details on Lafu’a case will be in Wednesday’s issue.