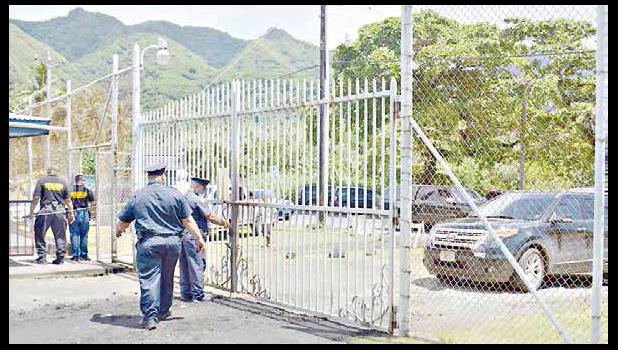 Pago Pago, AMERICAN SAMOA —  Detectives of the DPS Vice & Narcotics Unit are investigating a matter regarding a package containing a huge quantity of crystalline substance which someone supposedly tried to smuggle into the Territorial Correctional Facility (TCF) early Wednesday morning, last week.

A senior police officer at the DPS confirmed to Samoa News yesterday that the matter was referred to the Vice & Narcotics Unit this week, and detectives are carefully looking into the allegation.

“We have the report from the TCF regarding this matter including the name of those who are allegedly involved. DPS has to go through the process by reviewing every single piece of evidence including talking to those who are involved to determine the motive of the alleged action,” said the senior office who wanted to remain anonymous.

A test was conducted on the illegal substance that was found inside the package using the Reagent Field Test and the result was positive for methamphetamine.

A reliable source (RS) told Samoa News that a woman who has two pending criminal cases in High Court involving unlawful possession of illegal drugs charges is behind the alleged incident.

The RS said, it was around 3:00p.m. last week Wednesday when the said woman was at the TCF front gate to drop off a package for a male inmate, who also has a pending case in High Court, which is from when police searched his body during a police drug bust early last month and allegedly discovered a small baggie containing crystalline substance in his possession.

Wednesday is the “Drop Off Day” at TCF, where families are allowed to drop off food, clothes, etc for their love ones who are serving time behind bars, and the drop off is between 8:00a.m. to 3:00p.m. the RS told Samoa News.

The RS stated that around 3p.m., the inmate who was supposed to receive the package informed one of the new police officers who was on duty that morning that a family member was coming to drop off his clothes and food. The inmate then asked the police officer if he could deliver the package to his room.

Without knowing anything about the package, the new prison guard went to the TCF front gate and allegedly received the package from a woman. Upon receiving the package, the woman then left and the police officer make his way to the back to deliver the package to the male inmate.

Drugs entering TCF and prisoners having access to drugs has been an ongoing problem in the territory.

In May of this year, drug paraphernalia was found at the TCF during a shakedown by DPS Vice & Narcotics Units.

Prior to the shakedown, the Chief Probation Officer and his team carried out drug testing as required by the High Court for certain inmates who are serving time at the TCF as a condition of probation.

The random drug tests resulted in 3 inmates testing positive for meth. They were John Tuupo, Tolupo Hodges and Wayne Gasolo.

Tuupo and Gasolo were in prison for contempt of court, with Tuupo serving an imprisonment term of 90 days and Gasolo for 60 days.

It was during Gasolo’s sentencing in August of last year when Kruse told the government attorney at the time that, “I used to say that immigrants was the major industry on island but it seems that it’s now drugs that enter the territory.”

As a condition of his 5 years probation, Gasolo was ordered not to possess any illegal drugs or consume any alcohol, and he is subject to random drug and alcohol testing, Kruse said would be conducted when he is released form jail as well as during his detention period, “because I’m not sure about the facility, whether it’s drug free or not.”

Most recently, a former DPS police officer who was detained at the East Substation to await sentencing tested positive for drugs. Police sources say a female officer who was on duty at the substation at night last week, saw Olataga Wilson lighting up a pipe.

The next day, detectives from the Vice & Narcotics Units conducted a drug test of the detainee and the test was positive for methamphetamine. Wilson was then taken back to the TCF to await his sentencing, which is Sept. 28, 2018.

Both Wilson and Letuli admitted to police that they smoked methamphetamine with other former police officers during working hours inside the JDC.