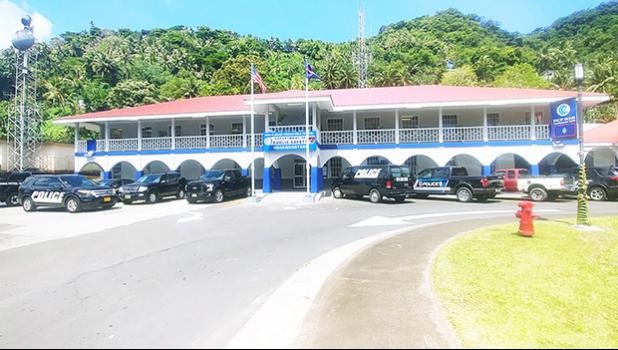 He’s allegedly been living with Assistant Attorney General Laura Garvey for a while
By
Ausage Fausia
ausage@samoanews.com

Pago Pago, AMERICAN SAMOA — A DPS detective accused of resisting arrest when several officers tried to calm him down while he pointed a gun to his head in a suicidal act was arrested Monday night.

Det. Justin Thomsen made his initial appearance before Judge Elvis P. Patea yesterday morning. He is charged with one count of resisting arrest, a class A misdemeanor, punishable by imprisonment of up to one year, a fine of $1,000 or both.

During court proceedings, Dunn requested that Thomsen undergo a mental evaluation and the request was granted.

A Status Hearing is set for Sept. 17th. Meanwhile, Thomsen remains in custody until the outcome of his mental evaluation.

The government claims that around 9:10p.m on Monday, Sept. 2nd, several officers were alerted regarding Thomsen’s whereabouts, after he sent a goodbye message on his Facebook account to a female cop.

A police sergeant requested the DPS Tafuna Substation for a group of cops to be sent to Thomsen’s Iliili residence to check on him. Several police officers responded and later informed the Watch Commander that Thomsen wasn’t home.

An hour later, around 10:28p.m, another request was made to the DPS Tafuna Substation by other senior cops, to send a police unit to the kennel in Tafuna to pick up Thomsen.

Several officers responded to the call and were able to pick Thomsen up from the kennel. Thomsen was handcuffed and taken to the Tafuna Substation.

A female cop told investigators that around 8:45p.m that night, she received a message from Thomsen on Facebook saying, “Goodbye.” She said she immediately called Thomsen’s cell phone and when she asked him if he was ok, he said “no.”

She then asked Thomsen what was going on and he replied, “You guys take care of yourselves” before hanging up.

The female cop immediately got into a police unit and drove to Thomsen’s Iliili home to check on him. At the same time, she contacted another police lieutenant and told him that Thomsen sounded suicidal, and that she on her way to check on him.

When the female cop arrived at the Thomsen residence, she met with Thomsen’s wife who told her that her husband was not at home and she needed to check with one of the female Assistant Attorney Generals.

The female cop texted the female lawyer on messenger, asking if she knew where Thomsen was, and the Assistant AG said she didn’t know. At the same time, Thomsen’s wife called him, and when he answered, his wife said there were dogs barking in the background.

The female cop figured that Thomsen might be at the kennel in Tafuna. That’s when she contacted a male cop and asked him to meet her at the kennel.

When the two cops arrived at the kennel, Thomsen’s police unit was parked outside and the female cop found him sitting at a desk pointing a gun at the right side of his head.

The female cop pleaded with Thomsen not to do it, as she continued to walk towards him. The male cop also tried to talk Thomsen into putting the gun down, and talking to them instead.

Thomsen had an empty liquor bottle and a few cans of beer that he was still drinking. The two cops slowly made their way towards Thomsen, still trying to talk him into putting the gun down. At this time, Thomsen kept pointing the gun at his head, his chest, and back to his head.

The male cop stood in front of Thomsen’s desk and asked him for the gun but Thomsen continued to point the gun at his head. Thomsen had his finger on the trigger, which made it hard for the two cops to snatch it away from him.

Thomsen was searched and no other weapons were found on him.

The male cop told investigators that after the gun went off — one round towards the ceiling of the kennel — he struggled with Thomsen, trying to remove the gun from his hand. When he was able to, he said he also removed a pocketknife he saw on Thomsen’s table.

The male cop said he quickly ran out of the building and unloaded Thomsen’s gun by removing one bullet in the chamber and placing it back into the magazine.

When questioned by police, Thomsen’s wife explained that her husband hasn’t been home for a while —that he had moved out and was staying with Assistant Attorney General Laura Garvey, but they agreed that he was always welcomed home.

She said she wasn’t aware of the situation until a DPS sergeant came by the house asking if Thomsen was home. According to his wife, she and Thomsen never got into an argument and were never on bad terms.