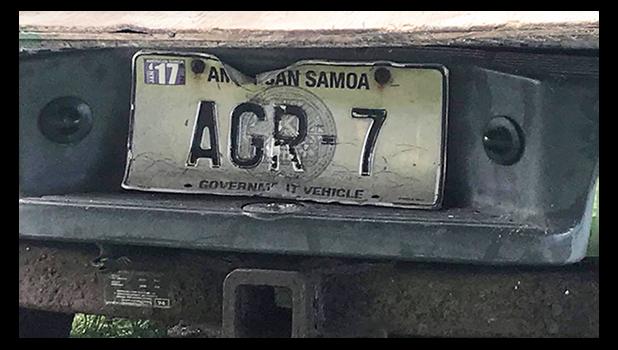 Pago Pago, AMERICAN SAMOA — The motor accident death of a staffer of American Samoa's Department of Agriculture has prompted the director to submit his resignation.

The worker died in a traffic accident on New Year's Eve in the village of Failolo.

She was allegedly riding in the back of a DoA truck and was thrown out with another passenger, when the driver couldn't negotiate a curve and ran off the road. Alcohol and speeding are alleged to be involved.

The accident followed an end of year luncheon at the DoA compound.

Following the fatal accident, the Director of Agriculture, Filifaatali Mike Fuiava, submitted his resignation, which has been accepted by Gov. Lolo Matalasi Moliga.

In a press release from the Governor’s Office yesterday morning, the governor noted that it was with regret that he has accepted Filifaatali’s resignation. Lolo said he agonized over accepting the resignation; however “the reasons given were not only very compelling… but they also clearly demonstrated and exhibited exemplary leadership qualities, which include the acceptance and ownership of consequences…”

Governor Lolo said he is thankful for the DoA director’s “invaluable contribution to the Lolo Lemanu Administration and the people of American Samoa.”

He further offered his heartfelt condolences on behalf of Lt. Gov. Lemanu Peleti Mauga, government leaders and the people of American Samoa to the parents and extended family on the untimely loss of their daughter. He also asked for prayers for the injured DoA employee in the ICU.

Samoa News was told the Department of Agriculture has a meeting this morning with the governor and acting director Sala Mataese Samuelu.

In the meantime, the driver, a female DoA employee who was taken into custody after the accident, appeared in court yesterday morning for her initial appearance where she was also served a warrant. May F. Sagale is being charged with vehicular homicide — a felony — causing the death of Samaraki Tusitala; and reckless driving (second degree assault) in causing serious physical injuries to Gataiala Niumata-Siale.