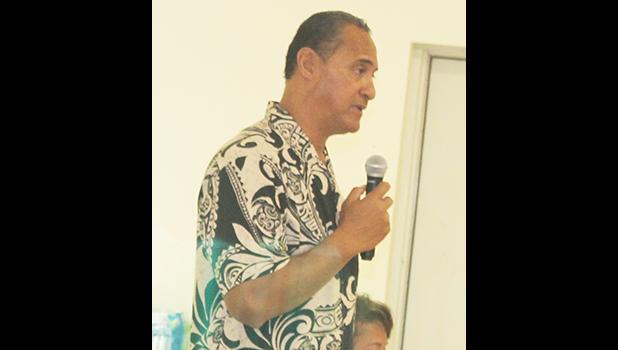 Pago Pago, AMERICAN SAMOA — “In observance of Flag Day [2021], all public schools will be closed on Friday, April 16,” declared Gov. Lemanu Peleti Sialega Mauga in his Holiday-Flay Day 2021 memorandum issued last Friday. He said all ASG employees shall report to their offices and/or respective assignments on that day.

Monday, Apr. 19th, will be observed as a holiday in American Samoa and all government offices will be closed and normal activities suspended. ASG employees required to work that day will receive holiday wages in accordance with applicable laws and regulations.

“I encourage you all to take this weekend to reflect and celebrate our union with the United States of America,” the governor said. “Thank you for all your hard work and dedication.”

Lemanu had revealed during last Thursday’s cabinet meeting the Flag Day holiday on Apr. 16th, which is a scaled down event this year, with the usual prayers and flag raising ceremony at Malaeoletalu in Fagatogo. And it’s a working day for ASG. (See last Friday’s Samoa News edition for details).

“The goal of the tournament is not only to promote fishing, but also to encourage the anglers to use the Catch-It-Log-It App to enter their catch data,” Taotasi said in a separate statement last Friday. “The newly developed App will aid DMWR and American Samoa to improve data collection gaps that currently exist.”

The registration and boat captain’s meeting will be on Apr. 13 from 4-7 p.m at Sadie’s By the Sea. “We’ll also be conducting training for the App during the Captain’s meeting as well,” he explained.

There are 8 categories for the tournament: marlin, sailfish, yellowfin, masimasi, dogtooth tuna, wahoo, skipjack & miscellaneous. The top 3 heaviest fish for each category will qualify for cash prizes. There will be many other prizes too, as well as raffles for the fishermen during the tournament, which will be at the Malaloa marina and will feature end-of-day auction of fish catch for the public for both days of the tournament.

“We want to try something different this year, and offer to sell the fish to the public, which has never been done before,” the director said, noting that proceeds from the fish sale will benefit the Pago Pago Gamefishing Association, the American Samoa Alia Fishing Association, as well as Hope House.

Also mentioned at the cabinet meeting, but very briefly was the Agriculture Department’s 2021 Flag Day Food and Farm Fair at the Veterans Memorial Stadium from Apr. 14th to Apr. 17th — which were the dates and name of the fair announced in a letter of solicitation last month from DoA to the private sector.

But in a news release last Friday from the Governor’s Office, the event is now called the Flag Day International Farm Fair and opens from 8a.m to 8p.m with over 220 vendors invited. The Arts Council will also be providing entertainment beginning at 5 p.m.

Along with the local vendors, the Fair will have jumpers for kids, music, and entertainment. There will be over 65 restaurants, 110 farmer boots, 28 florists, 8 livestock stations, 11 curators.

The governor is quoted in the news release saying that the fair is “a great way to build and promote agriculture advocacy” and commended DoA director, Solia Mutini, for putting together this event.

"If you never grew up on a farm, you would not understand the commitment and hard work ethic it requires. I look forward to experiencing a family environment, similar to large county fairs on the mainland,” he said.

Mutini is quoted in the release saying that, this “will be the largest farm fair of its kind. It is also our goal to support the local farmers, florists, and curators whenever we can.”

“When we have these fairs, they support local brands and businesses. It gives them a platform to showcase what our local farmers are capable of growing,” he said.