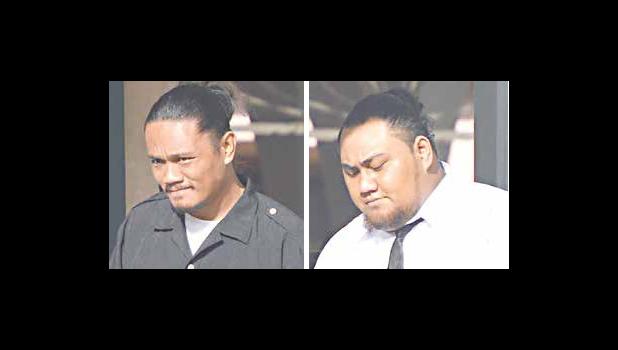 Pago Pago, AMERICAN SAMOA — The two men convicted of receiving stolen property and then selling the items knowing they were stolen from a house in Nu’uuli were sentenced last Friday.

Fuavai Sua and Lualima Taliu were ordered by Acting Associate Justice Elvis P. Patea to serve 14 months in jail, as a condition of a 5-year probation term.

Sua and Taliu have been in custody since their arrest; neither was able to post a $15,000 bond.

Sua was initially charged with one count of receiving stolen property, a class C felony. But under a plea agreement with the government, he pled guilty to the amended charge of conspiracy to receive stolen property from another person, a class D felony.

With his guilty plea, Sua admits that on July 8, 2017 he agreed to help Taliu sell a DVD player, DVDs, and a pair of black combat boots to his brother-in-law from Faleniu, knowing that the items were stolen from the home of Iuniasolua Savusa of Nu’uuli.

Sua further admits that the items he helped Taliu sell exceeded $100 in value.

Under a plea bargain with the government, Taliu pled guilty to receiving stolen property.

The remaining charges were dismissed.

With his guilty plea Taliu admits that on July 8, 2018 he took a DVD player, DVDs, and a pair of black combat boots to a person in Faleniu, knowing that the items were stolen from Savusa’s Nuuuli home.

Taliu admits the value of the items he stole was over $100.

Charges against the defendants stem from an incident in which the pair allegedly broke into a home and took off with personal property.

The homeowner was off island during the time of the alleged break-in and only learned of the incident when he returned to the territory.

Among the alleged stolen property were 10 cases of pisupo, 10 cases of wahoo, a gold chain, DVD players, DVDs, and clothing that included several men’s suits.

Sua and Taliu appeared in court last week for sentencing.

When given the chance to address the court, Sua apologized for his actions and begged for a second chance to return home to care for his family.

He also apologized to his family, village, and church for what he did.

He did not apologize to the victim.

Sua told the court that the 13 months he has spent in prison taught him a good lesson and he is truly remorseful and wants to go home to offer his life for God and to serve his family.

Taliu also apologized to the court, his family, and his parents but like Sua, he did not apologize to the victim.

He told the court it was his carelessness and stupidity that pushed him to break the law, and caused him to waste many months of his life in jail.

He assured the court that if he gets a second chance, he would never appear in court again.

White asked the court to grant his clients another chance, allow them to go home and do something good for their future.

The defense attorney said his clients are both young and still have a lot to learn in life.

He then asked for a probated sentence without any additional period of detention.

In delivering his sentence, Patea told both defendants that despite their conviction, the court has taken into consideration the fact that they are first time offenders, they fully cooperated with the government during the investigation, and they are both young and truly remorseful for what they did.

“Reading from the Pre Sentence Report, we note that the motivation behind your actions was to sell the stolen items so that you can go out and buy a case of beer for you and your friends,” Patea said.

The court sentenced both men to 5 years probation, subject to certain conditions.

Both were ordered to serve 20 months detention; however, the court ordered them to serve only 14 months, and the remaining 6 months is stayed, based on their compliance with conditions of their probation. With time served, Sua and Taliu will be released next week.

While on probation, the two are ordered to remain alcohol and drug free.

They are also to submit to random testing when required by the Probation Office, and they must remain law abiding.