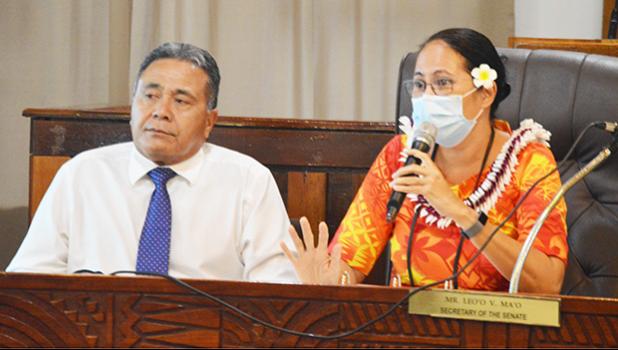 Despite rumors, Budget Office confirms funding for the project is now set aside
By
Ausage Fausia
ausage@samoanews.com

Pago Pago, AMERICAN SAMOA — It was revealed during a Senate Government Operations Committee hearing last Friday where the director of the Department of Public Works (DPW) and the owner of Paramount Builders, the winning bidder for the construction project, testified that the current total cost for the new Fono building is now $16 million — up from the original contract price of a little over $10 million.

The new cost includes the change order for $5million+ and this is to drive the piles for the foundation for the new building.

This was revealed by Faleosina Voigt when asked by Senators during the hearing. The hearing was chaired by Sen. Togiola T. A Tulafono, who is the committee chairman.

The hearing was called after senators sought information regarding the new Fono building including the funding, funding source, where the project stands, when it’s expected to be completed, and any leftover funds, and if there are sufficient funds to complete the project.

The Senate is also requesting from DPW copies of the original architectural drawing of the project, a copy of any change orders, original cost of the project based on the engineer’s cost estimate, and a copy of the signed agreement with the contractor, which is Paramount Builders.

Voigt informed the committee that there have been no changes to the project.

She stated the project does not include offices for lawmakers. The current project only includes the two chambers. She said only Paramount and Fletcher submitted bids for the Fono building project and Paramount with a bid of $12.8 million was picked as the lowest bidder. However, Paramount’s bid was lowered to $10 million after the construction of the parking lot at a cost of $2 million was removed from the original plan. She said the construction of the parking lot was then given to DPW.

The cost for construction of offices for lawmakers is estimated at between $3.5 million to $4 million, according to testimony and this portion of the project has not been put out for bid.

Sen. Fonoti Tafaifa Aufata wanted to know how much was spent on the first foundation that was removed pursuant to order from the FEMA (Federal Emergency Management Agency). Voigt explained that it was $1.2 million.

Committee chair Togiola asked the contractor, Papalii Laulii Alofa if his company can do both the parking lot and the new construction of offices for lawmakers, which has not yet been put out for bid.

Papalii assured the committee that if his company is awarded construction of offices for lawmakers, he would do the best he can to complete all the projects.

Papalii explained to the committee that the bid was only for the two chambers. The construction of offices for lawmakers was never included in the bid.

Samoa News understands that Fletcher’s bid came in at $20.4 million and the cost of pilings was included.

Sen. Alo Dr. Paul Stevenson said that he’s very sad after looking at the picture of the new Fono building recently because it does not reflect the real Samoan culture. He said that everything we do in life must reflect who we are. He said the first photo of the new Fono building revealed during the groundbreaking was a good one, however the newer photo that was brought to his attention does not reflect the kind of building the Fono should have.

The original photo is shown here of the Fono building that was published in Samoa News. [SN file photo]

The Fono Offices photo shown last week during the hearing. This photo shows the Fono offices in the back of a two-story structure that looks to be a rendering of the Fono building that’s about to be built.  [photo: AF]

He advised Voigt and Papalii to reconsider their work and do their best not only to serve leaders but also the community.

The new picture of the project was not revealed during the hearing.

Sen. Uti Petelo said he does not accepted the testimony from the witnesses that there have been no changes in the project while at the same time the change order is now costing the government over $5 million. He wanted to know if there are any other change orders on the way because it will cost the governments hundreds of millions if these change orders keep coming forward.

It was in the middle of questions and answers between the committee and the witnesses when Sen. Malaepule Fuega Saite Moliga raised a motion to end the hearing and excuse the witnesses. He advised senators to have faith in the new administration and the director of DPW that they will do a good job for the Fono. He further stated that it’s now clear that the first project only included the Fono chambers and there were no offices for lawmakers.

Soliai reminded Voigt that he was saddened to hear that FEMA advised the former administration to build the piles for the building, however they never listened but turned around and continued the construction. Soliai said that this is not the contractor’s fault. It’s the government’s fault.

Togiola said he understands that of the millions, which were allocated for the Fono building — only $48,000 now remains.

Voigt explained that the $19 million collected from the bonds to fund the construction of the new Fono building has been set aside and the remaining $48,000 is from the un-obligated fund. A representative from the Budget Office also confirmed that the funding for the project is now set aside.

When asked about the funding for the second project which included the construction of offices for lawmakers, Voigt said the government would locate funding for this project.

The groundbreaking for the new Fono building was held in August of 2018 and work on the foundation started the month after.

However it was halted after the Federal Emergency Management Agency raised questions about the lack of piling for the foundation, which is a requirement for buildings in a flood zone area. FEMA warned that failure to comply with the flood zone insurance program requirements would result in American Samoa losing coverage and as a consequence, future federal funding for disasters and other US government funding such as for Capital Improvement Projects would be threatened.

At the hearing before the House of Representative last year, Voigt explained that if the territory was found to be in non compliance with federal regulations, the territories’ flood zone insurance program would be put on probation for one year. After that, it could be suspended and that would curtail funding for disaster assistance.