Chamber of Commerce gets a dire warning from the fishing industry 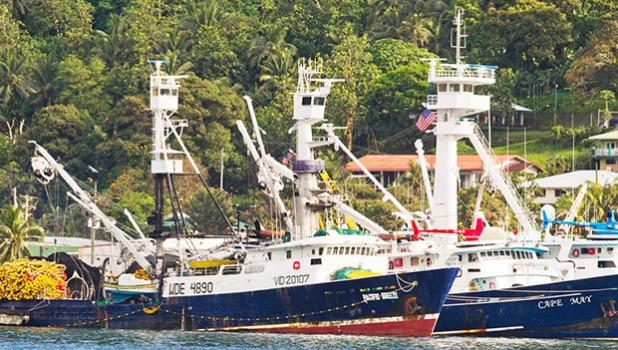 "The cost of fishing in Pacific waters is driving boats out of business". He noted that the cost of fishing licenses had risen from $100,000 annually to $1.8 million in some instances. Fishing in neighboring island home waters costs $15,000 per day with no guarantee of a catch. "Coast Guard fines range from $1.5 to $2.5 million. No boat owner can afford that".

Even more disturbing to the assembled members in the audience is the fact that Bumblebee is offering $165 dollars more per ton to off load catch in Fiji with no threat of Coast Guard intervention.

Mr Park, a former longliner owner was equally blunt. "We had 350 Korean boats here at one time. Now there are zero. No owner will come here and risk being fined 1 or 2 million dollars.".He noted that most of the Asian boats now home port in Fiji or Apia."

The somewhat shocked business members were left with no uncertain dilemma clearly pointed out by Frank Barron; " No fish delivered to the dock at StarKist means the company has no option other than shut down operations and lay off employees. That day," he added" is just a question of when, not if."