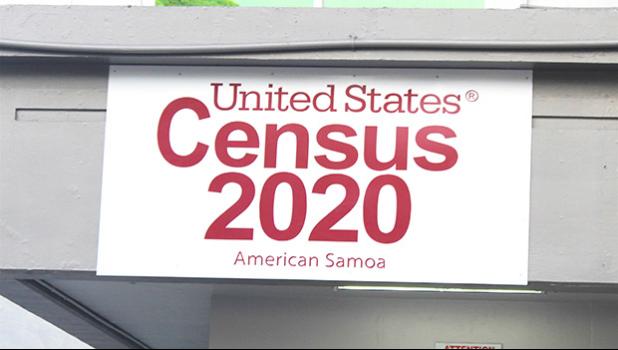 Says confidentiality of respondent is its #1 concern
By
Fili Sagapolutele
fili@samoanews.com

Pago Pago, AMERICAN SAMOA — With the US Census Bureau office now open in American Samoa, the federal agency will start hiring staff later this year; and early next year, it will begin to send out field staff to identify places where people live, followed by data collection.

This is according to the Census Bureau’s 2020 Census Advisor to American Samoa, Jason Kopp, at last week's official opening of the local office, on the 2nd floor of the Lumana’i Building in Fagatogo.

Kopp is residing on island during his tenure.

Other Census Bureau officials who traveled to the territory for the opening are James Treat, Senior Advisor for Decennial Affairs, Office of the Director; and Jennifer Kim, Assistant Division Chief for Content, Translation, Puerto Rico and Island Areas Operations.

Speaking at the opening, Kopp explained that the 2020 Census is a once-in-a-decade count of the entire population of the US, and it “produces high quality data that is used in making decisions about the future of our country” and its territories.

“Responding to the 2020 Census of American Samoa paints a statistical picture of the [territory], and helps ensure that your community gets the funding that it needs,” Kopp told the audience, which included Lt. Gov. Lemanu Palepoi Sialega Mauga.

As the Census advisor, Kopp is the senior on-site staff member, overseeing the 2020 census of American Samoa. “So what exactly does that mean? First and foremost, I will advocate an accurate census in American Samoa,” he said.

He told the audience at the Tauese P.F. Sunia Ocean Center that the Census Bureau last December entered into a partnership with the American Samoa Government, by signing a contract with the governor for the 2020 census here.

“Now that the office is officially open, we’ll begin recruiting and hiring census staff. First we will hire staff for our office and later this year we’ll be hiring staff to work in the field,” he said. “We will also begin sharing information with the public about the 2020 Census of American Samoa, why it is important, how we will keep your data safe, and how everyone on island can participate.”

Data collection will be completed by the summer of 2020, he said. “It is an honor to be part of the community and to work on the 2020 Census of American Samoa.”

In her remarks, Kim — who oversees 2020 Census operations in the US territories — said “we have full trust and confidence that [Kopp] will help lead us to a successful census here”.

“The Census Bureau is committed to a high quality census in American Samoa and we have made enhancements since the last Census,” she said. “We began preparations significantly earlier than we had in previous censuses to ensure that the census is accurate, timely and meaningful for American Samoa.”

In his remarks, Treat said that with the local office now open, “we can start the hiring process, training and putting people out in the field, to start collecting information and then start the enumeration process.” He said the opening of the office is an example of the commitment that Census Bureau director, Dr. Steven Dillingham and the senior leadership at the Census Bureau have “to ensuring that we do have a high quality census in American Samoa.”

He said, “…This [census] information will help to improve the quality of life for years to come. It will used for the next decade,” adding that the census process is a partnership that involves people, organizations, leaders of the territory, ASG, the field office staff here, the “people that we hire to go out in the field to do the work”, and “all of you”.

“Respondents’ privacy is our number one concern to ensure that they are not recognized. And that is a critical part of the census — confidentiality.” Additionally, “getting people to provide their information is critical to having the right information” for informed decisions.

The Census Bureau officials commended with great appreciation the support from ASG and others on island in getting the 2020 census moving forward.