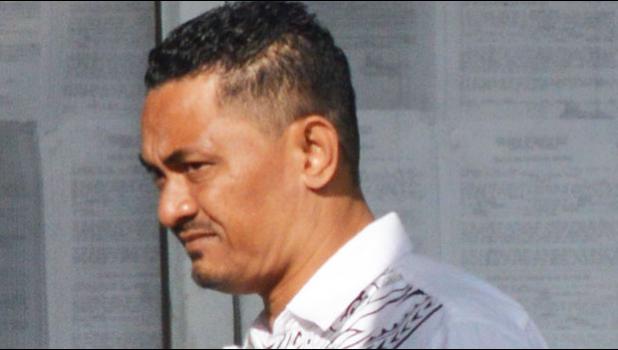 After the dust settles, he gets ‘time served’ plus 2-1/2 months, must leave island
By
Ausage Fausia
ausage@samoanews.com

Pago Pago, AMERICAN SAMOA — The unfaithful bus driver who was having a secret sexual relationship with a 16-year old girl for months is paying a small price for his actions.

Acting Associate Justice Elvis P. Patea ordered Taifau Mulipola to serve a period of detention of 14 months as a condition of his 5-year probation, and upon serving his time at the Territory Correctional Facility (TCF), he is to depart the territory and remain outside of its borders for the remainder of his probation.

“While there are many factors surrounding this case, the court has to consider the main factor, the protection of our young children and the community from people like Mulipola,” Patea said.

Mulipola, who has been in custody since his arrested last year was initially charged with two counts of sexual assault, two counts of 1st degree sexual abuse, all class C felonies, and endangering the welfare of a child, a class A misdemeanor.

Under a plea agreement with the government, Mulipola agreed to plea guilty to two counts of 1st degree sexual abuse. In his guilty plea, he admits that between May to July of last year on two separate occasions, he touched the breast of a 16-year old female student in a sexual manner.

Mulipola appeared in court yesterday morning for sentencing. He was represented by Public Defender Michael White while prosecuting the case was Assistant Attorney General Woodrow Pengelly.

When given the chance to address the court, Mulipola apologized to the court for his actions and immediately begged for a second chance to go back home to care for his family, especially his wife and young children.

Mulipola, who was in tears told the court that he felt remorse for what he did, and he missed his family so badly.

“Please your honors, allow me a second chance to go back home and care for my wife and my young children. My family strongly depends on me and I want to go back home to care for them. I’m remorseful and I will never do this again,” Mulipola said in tears. He did not apologize to the victim or his family.

Mulipola’s wife was called to the stand, where she spoke on behalf of her husband and also told her side of the story of what had caused her husband to be in jail for almost a year now.

According to the wife, who is an ECE teacher for 3 years now, her husband is a hardworking man, but throughout last year he acted very different. She also noticed a huge difference in his behavior in their marriage.

She then tried to confront him and asked if there was anything happening to him, but he said no. According to the wife, she knew that her husband was hiding something from her, despite his many promises that he was not keeping any secrets from her.

“I believe in giving a second chance to someone who makes a mistake in the first place. What he did to the victim and family was painful, but what he did to me and my children was more painful,” the wife said.

“I totally believe that he was put in jail for a reason. God wanted to teach him a lesson, and I have noticed a lot of changes in him every time I visit him in jail. He apologized to me and my children for what he did and I accepted his apology.”

“What my husband did to me was painful, but having four young children without a father is more painful. So, please your honors, I really need my husband to help me in taking care of our young family. Please, give him a second chance,” the wife concluded.

White asked the woman if she’s still willing to continue staying with Mulipola as husband and wife, and the wife responded, “Yes, I’m still his marriage wife.”

White asked the court for a probated sentence, and to allow his client to go back home to care for his young family. White stated that everyone makes mistakes and what his client did was a careless mistake, but it’s good to hear from him that he’s remorseful and learned a huge lesson for his future while sitting in jail.

Prosecutor Pengelly did not mince words when he was given the chance to argue his final submission.

Pengelly stated that the defendant was a bus driver, and he was responsible for transporting other people’s children including young girls to school everyday, but what he did proved that he was targeting young school girls for sexual behavior.

His actions should not be tolerated, and a strong message should be sent out so that people like him will understand that we will not tolerate these types of actions in our community, Pengelly said.

In delivering his decision, Patea said, “Each side will turn in their own facts about the case, but for this case in particular, the fact the court has to consider is the protection of our community and our young children from people like this defendant.”

Mulipola was sentenced to a term of imprisonment of 5 year for each count of 1st degree sexual abuse, and his sentence will run consecutive. However, the imprisonment term is suspended and the defendant was placed on probation for a period of 5 years, subject to certain conditions.

The defendant was ordered to serve a period of detention of 14 months. He is credited for the 11 and half months he has already served while in custody awaiting sentencing. Upon serving his period of detention, Mulipola is ordered to depart the territory and remain outside of the jurisdiction of American Samoa for the period of his probation.

He has to register as a sex offender, and must be administered an HIV test pursuant to the statute.

Patea also ordered that the copy of the court judgment should be forward to the Immigration Office, so that the defendant’s name will be included on their lookout list.