Bill raising the marriage age for girls is signed into law 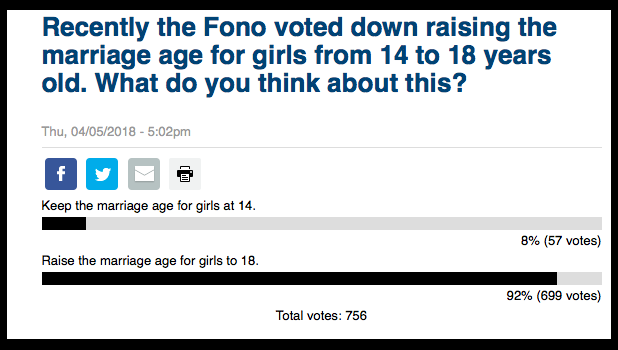 Pago Pago, AMERICAN SAMOA — Gov. Lolo Matalasi Moliga has signed into law, a Fono approved bill, which raises the marriage age for females from 14 to 18 years of age — which is the current marriage age of males, under the law.

“This law will help protect our young women who are still growing and maturing at this young age,” wrote Lolo in a Sept. 5th letter to Fono leaders after signing the bill into law.

“It will allow them the opportunity to exert more control over their lives to choose the path in life that is of their own desire; and it will help place them on equal footing with our young men,” the governor said.

The legislation, which originated from the House and sponsored by female faipule Rep. Fialupe Lutu Fiaui, was approved by the the Fono last month. The measure had garnered a lot of public support, especially from mothers and advocates against child abuse, after the Senate had rejected earloer this year an identical House bill.

The new law becomes effective 60 days from the end of the current session during which it was passed. The current 4th Regular Session of the 35th Legislature, ends in three weeks time.