Aumua Amata files to run for reelection to Congress 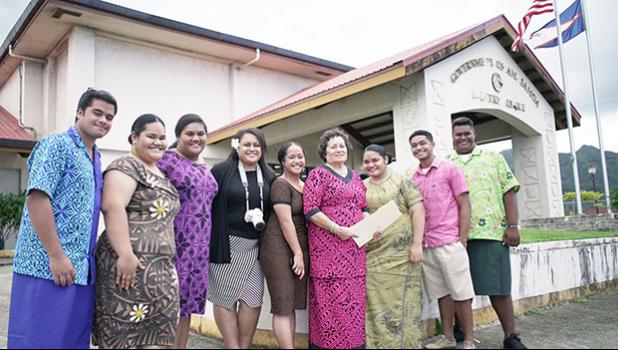 Pago Pago, AMERICAN SAMOA — Flanked by enthusiastic supporters, Congresswoman Aumua Amata yesterday delivered to the American Samoa election office petitions signed by nearly 600 voters endorsing her bid for reelection to the U.S. House of Representatives in the general election to be held on Tuesday, Nov. 6, 2018.  At the same time, she handed to Chief Election Officer Dr. L. Uiagalelei the $500 filing fee required to make the filing official.

Earlier this spring, Amata publicly announced her intention to run again and later filed the requisite forms to the Federal Election Committee that makes her candidacy official in the eyes of the federal government. “This is a federal race,” Amata said, “and it’s important to show that American Samoa takes seriously federal law, procedures and rules.”

While there are thresholds that trigger filing requirements, they are quickly reached by serious candidates. A review of FEC records reveals that Amata is the only candidate who has filed with the FEC so far this year, although three weeks remain until the filing deadline, so that could change.

The next step will be the formal opening of her campaign headquarters in Pago Pago, and the final step being a formal kickoff event to be held on a date to be announced, where she will announce and introduce her campaign leadership team.

“I am deeply gratified for the support I have been given by our people and their encouragement to continue to fight for our priorities in the next Congress. We have made great strides, including significant progress in veterans’ issues, increased funding for education and ASG operations, mandating an official report to Congress on the conditions of the LBJ Tropical Medical Center, and eliminating irritants like an excessive hold time by banks on off-island checks. But there is much work to do,” she said, “and I humbly ask our people to send me back to Washington to continue fighting for the needs of our islands.”