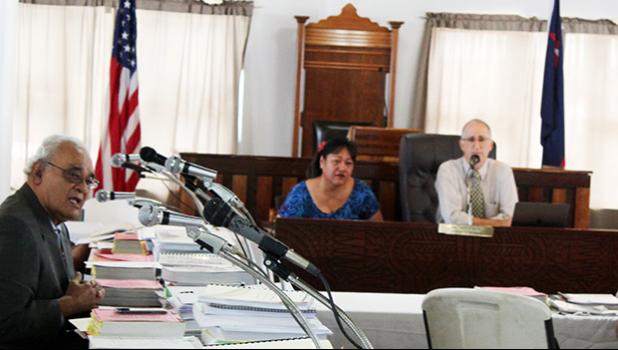 Wolman made the statement as part of his opening remarks yesterday when he appeared along with chief financial officer, Fala Sualevai before the joint committee hearing which lasted more than an hour.

“When you go through our budget, you’ll see a lot of consultants, which I know is sometimes a sensitive point for Fono budget hearings,” Wolman told the committee. “Let me say that we are unapologetic of our extensive use of consultants.”

“We are a small remote telecom that must keep up with a global industry and advance technology,” he continued, noting that ASG is developing all the expertise needed locally with the help of consultants.

“We have an extremely local staff,” which is about 175 employees and only 3 are from outside of the two Samoas, Wolman said, adding that he considers himself - who has lived here for 3 decades - among those three.

“We use a lot of consultants. They cost a lot of money. We do not apologize. It’s necessary for what we do. We are on track and I’m proud,” he said.

Wolman noted that the issue of increments has surfaced many times during the budget hearings as reported by the media. “ASTCA is proud to say that we did provide increments and reclassification in FY 2019 and we hope to do so again in 2020,” he said.

He explained that ASTCA doesn’t get any local funding from ASG for its operation but receives revenues through fees paid for its services and from its participation in federal programs - that are not grants - but are designed to subsidize rural telecoms.

For wages, he said, “ASTCA wages are lower than I would like them to be. I think the only way ASTCA is going to grow and prosper is by growing and not by cutting.”

“We are competing for the best staff members against other government agencies and the private sector. And we are dedicated to making sure that we are an employer of choice, which includes providing increments and reclassification,” he said.

Wolman emphasized that “our increments are performance based - they are based on performance evaluations and not on years of service.”

At the outset of his remarks, Wolman explained that ASTCA is governed by a 5-member board of directors, who approve the budget. The board members are: chair Iulogologo Joseph Pereira; secretary, Alema Leota; and the other 3 are Omar Shalhout, Lagi Mauga Asuega, and Alofagia Nomura.

“Things are going well at ASTCA and American Samoa should be pleased and proud of what’s being done at ASTCA in the way of internet services, mobile services” and making sure that American Samoa is up to date with telecommunications in the 21st century.

For the past 2 years, he said, “ASTCA has been carrying out a very ambitious transformation program that allows us to serve the community now and in the future, with advance, comprehensive, and affordable telecom services….The last year or two, we have been preparing the field and starting to reap the harvest and sowing seeds; and starting this last year, since the Hawaiki cable was hooked up 13-months ago, we have been harvesting those seeds that we sowed in those fields that were prepared,” he said.

“And that will accelerate significantly in 2020. We will have new products, new services, new capabilities and we have done a lot in the last year or two,” he said, noting that he has been CEO for less than a year, so the credit for these achievements goes to the management team and team members.

He also noted the vast improvement in telecom with the launch of Hawaiki cable. “We are on track and all the trends at ASTCA are positive,” Wolman said. “We’ve been increasing revenues, we’ve been rationalizing our financing - debt and long term financing. And we are rolling out new products, particularly the LTE mobile network.

“We are more reliable than we used to be. We offer better cyber security, which is a big issue in today’s world. We are making investments in cyber security,” he continued, and pointed out that ASTCA has also been expanding and improving its coverage in services.

“With the LTE mobile network, we’re now providing services in areas never covered before,” including every village in Manu’a - which has gone for example from having 2 cell sites to 6 cell sites - and adding more new coverage cell sites on outer Tutuila villages.

Samoa News will report in future editions on the other issues discussed during the ASTCA hearing.