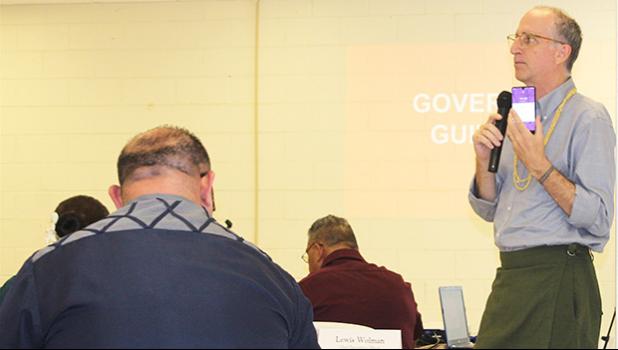 Pago Pago, AMERICAN SAMOA — Gov. Lolo Matalasi Moliga has appointed two members to the American Samoa TeleCommunications Authority board of directors. The appointees are Dr. Tupulua “Bone” Ta’ase, who is program director of Network and Systems for the local Department of Education, and business man Solip Hong, a member of several government boards.

The appointments were made in two separate memorandums, dated Nov. 27th, and are not subject to Fono confirmation because ASTCA continues to operate under an executive order. The appointment of the new board members came after the governor recently amended the ASTCA executive order, restoring the original 7-member Board of Directors, according to the Governor’s Office in response to Samoa News inquiries.

In his nomination memo, Lolo said Ta’ase possessess “broad experience in management, e-Rate policies and Network Procedures. Dr. Ta’ase is especially skilled at integrating technology and building an effective and productive relationship by maximizing deployment of technology.” Additionally, he has extensive knowledge of computer systems, software, and Compumatic Time Clock.

“Dr Ta’ase brings with him a wealth of experience in utilizing technology to improve student learning and student outcome,” said Lolo, adding that Ta’ase taught at the American Samoa Community College and taught part of the course as sistance learning for students in Manu’a.

According to the governor, Ta’ase “brings good skillset and experience that will help push” ASTCA’s “development agenda”.

“As a private sector member, he has provided invaluable perspective that creates a balanced viewpoint in the formation of development policies,” Lolo said of Hong, whom the governor points out “has been very generous with his time evidenced by his aggressive participation in meetings and activities of ASG entities to which he has been assigned.”

According to the governor, Hong is currently president and CEO of locally based company KS Inc., incorporated since 2009, which owns one of the largest supermarkets in the territory and a shipping agency that services 80% of the commercial fishing boats that call into American Samoa.

As a second-generation manager, Hong has diversified his family’s company into various new markets, said Lolo, noting that in 2015, Hong opened the Korner Cafe restaurant, which has a seating capacity of 70 people. And at the end of 2015, he owned the first locally-owned liquid propane gas company called Le Afi Energy Inc.

The new board members come at a time when ASTCA is forging forward with various developments, which the governor has been monitoring. At Monday’s cabinet meeting, the governor asked ASTCA chief executive officer Lewis J. Wolman for an update on developments  including its cable television system, or IPTV — which is undergoing testing.

Wolman explained that the cable TV system will be “rolled out during fiscal year 2020” and “will be high-definition with 50 channels. So things are going well at ASTCA but we ask for your patience,” he said.

Lolo said he has been “watching the IPTV for the last six weeks” and “you need to add some news channels and also some sports channels. I think that will really draw the people in.”

Wolman explained that before getting all 50 channels, the TV system will get all four major US networks out of Honolulu — ABC, CBS, NBC and Fox — all of them provide national news.  “They will come in high-definition and hopefully that will happen in the next 30-60 days,” he said.

For the overall operation, Wolman said “progress at ASTCA has been slower” than they hoped, but “it has been slow but sure.” For example,  the new LTE mobile network is up and running. He said there’s not much publicity about this latest development, “because we want to iron out a few bugs before we promote it with full force. And we expect that to happen in the next few weeks.”

“But many of you have had the opportunity to trial the new mobile network with those gold-colored phones for the last few months, and I hope you have experienced excellent service,” he said. Another development is that Manu'a is 100% mobile coverage on the LTE mobile network and this happened in the last few weeks.