American Samoa's fire dept down to one truck, one office location 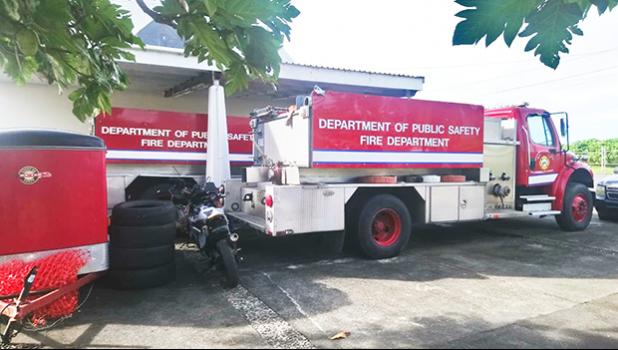 Pago Pago, AMERICAN SAMOA — Over the past month, Samoa News has been told that the local Fire Department is down to one fire truck — the other two (pictured) are parked at the DPS Tafuna Substation and have been down for two months, with the explanation that they are awaiting parts, according to a Samoa News source at DPS.

As a result, the Fire substations in Tafuna, Leone, and Fagaitua have been shut down and all employees have been transferred to the main Fire Station in Fagatogo (between DPS and ANZ Bank) which houses the only operable fire truck at this time.

One location, one fire truck to serve a population of about 60,000

Samoa News understands that the move has caused quite a discomfort for the estimated 30 Fire Department employees who are rotating around the clock on three shifts.

A source who spoke to Samoa News on condition of anonymity says he is ‘embarrassed’ with the current situation. He said the relocating of all fire crews to Fagatogo plays a vital part in the “response time” to emergency calls.

“If there is a fire reported from Amanave or Tula, the response time will be very long because the substations in Fagaitua, Leone, and Tafuna — which were built to serve residents near those areas — are all closed down,” he said.

“Lord forbid that more than one fire is reported on the same day. How do we determine which one to send the fire truck to? There is only one fire truck serving the whole island and as is the usual practice in American Samoa, nothing will be done until something bad happens.”

He concluded, “the situation we are in is very dire. We will not be able to provide assistance if fires break out because we only have one truck. As always, it’ll take a death in the territory for those in position to act and do something to address this.”

Samoa News contacted Fire Chief Cliff OBrien yesterday afternoon for a comment but he declined to offer an explanation, saying all inquiries should be forwarded to Police Commissioner Le’i Sonny Thompson.

As of press time, Samoa News was unable to reach Le’i, who was reportedly in a meeting at the Governor’s Office.

In addition to the shortage of operable fire trucks, firefighters are saying that their office is down to two government vehicles, both of which are old. Some of the ASG vehicles purchased during the same time have already been auctioned off or otherwise replaced.