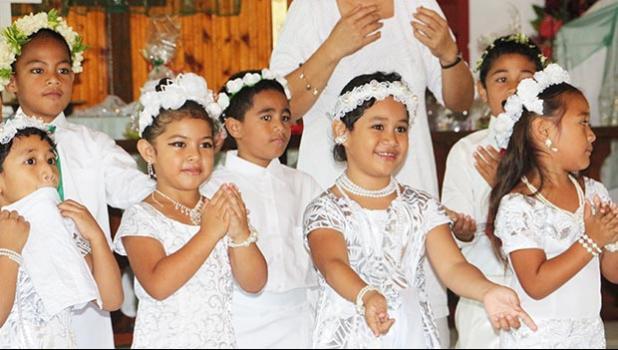 Pago Pago, AMERICAN SAMOA — The annual White Sunday celebration, coupled with the Monday federal and local holiday (Discoverers’ Day), adds up to a three-day weekend — and a busy one at that — as residents gear up for a day dedicated to the children of American Samoa.

Sunday, Oct. 13th is White Sunday, which is celebrated every year on the second Sunday in October.

White Sunday was introduced in the islands by Christian missionaries in the 1800s and has became a special holiday, with children being treated to the best — from new outfits to their favorite food during family toana'i.

As is the case every year, traffic Saturday is expected to be a nightmare, especially in the Nuuuli area around the Laufou Shopping Center as well as downtown Fagatogo.

Police are beefing up road patrols because of expected traffic congestion, and are calling on drivers to look out for pedestrians, especially young children. Parents are also urged to keep a close watch on their kids while out White Sunday shopping.

Local stores, bakeries, and other merchants report that they are always prepared in advance, of White Sunday - stocking up on ice cream, cake, pie, and other goodies.

The Congregational Christian Church of American Samoa and the Methodist faith lavishly celebrate White Sunday, and in past years it has spread to other faiths, although to a smaller degree. The Tongan community here will also be holding White Sunday services.

Tonga and Samoa — on the other side of the International Dateline — are celebrating White Sunday today (Saturday in American Samoa), which is their Sunday.

White Sunday is also celebrated in other parts of the world with Samoan communities, such as Honolulu, Los Angeles, San Francisco, Fort Hood (Texas), New Zealand, and Australia.

On Monday, a federal holiday, the local government will be closed, along with the majority of businesses in the territory, including ANZ Amerika Samoa Bank and the Territorial Bank of American Samoa (TBAS).

Because TBAS closes Monday, its Tafuna branch will be open today, Saturday, Oct. 12th from 8am-12noon.

For StarKist Inc.: their corporate spokesperson, Michelle Faist confirmed to Samoa News that “there will be no production” at StarKist Samoa on Monday and normal production will resume next week:  Tuesday- Saturday.

The long weekend has resulted in flights between the two Samoas being full, according to a report from the Pago Pago International Airport.

In honor of White Sunday and Discoverers’ Day, Samoa News will not publish on Monday but will return Tuesday.

Have a happy and safe “Lotu Tamaiti” American Samoa.