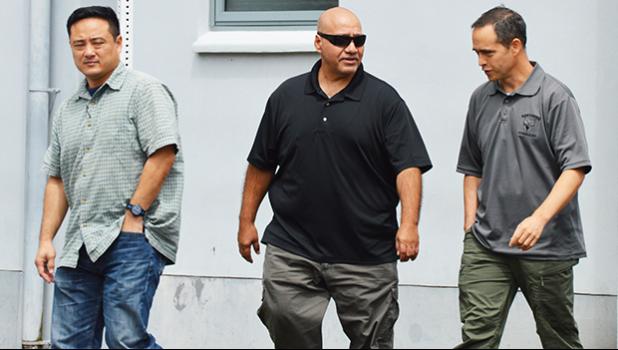 Local court dismisses PPD charges against him after feds step in
By
Ausage Fausia
ausage@samoanews.com

Pago Pago, AMERICAN SAMOA — An American Samoan man, who was facing misdemeanor charges at the District Court of American Samoa, was escorted by federal agents last Thursday night back to Hawai’i, where he is charged at the federal court in Honolulu in connection with a drug case.

Alapati Vaivai is one of the 14 defendants who were charged in a federal indictment handed down Aug. 22 by a federal grand jury in Honolulu in an alleged drug trafficking case.

Besides Vaivai, there are four other defendants with Samoan last names, according to court documents.

In the local case, Vaivai was charged with two misdemeanor counts of public peace disturbance.

He was represented by Public Defender, Michael White, while prosecuting the case was Assistant Attorney General, Woodrow Pengelly.

When Vaivai’s case was called, Sunia asked White how he found his client, the defense responded, saying that he was arrested by police pursuant to a bench warrant from the court.

Sunia turned to Vaivai and asked, “Where were you yesterday.” Vaivai responded, saying that he was at home.

“And why did you fail to appear in court yesterday (Tuesday) when your matter was called,” Sunia asked Vaivai. “One of the conditions of your release was to make all of your court appearance. So, that’s what you get, you failed to come to court, the police will hunt you down and arrest you.”

Vaivai told the court that he was waiting for his attorney to contact him. He said that he did not know that he has a hearing in court until the police turned up with the copy of the bench warrant to arrest him.

In response to Vaivai’s statement, Sunia told him that the purpose of the piece of paper he received after his last hearing was to remind him about the date and time for his next hearing.

When asked about the status of the case, Pengelly informed the court that the government has filed a motion to dismiss their case against the defendant. Furthermore, he stated that the defendant is scheduled to transport to Hawai’i for a pending case there.

Pengelly did not go into details regarding Vaivai’s pending case in Hawai’i.

A source confirmed to Samoa News that three federal agents flew down to the territory on Monday last week to escort Vaivai back to Hawaii where he is charged in connection with a drug case.

The three federal agents were also present in court during Vaivai’s proceedings.

White did not oppose the government’s motion.

Vaivai was escorted by detectives of the Vice & Narcotics Units back to the Tafuna Correctional Facility (TCF), where he was processed and released pursuant to court order. However, after being released, he was immediately rearrested and detained in custody, pending transport to Hawai’i.

The local case against Vaivai stems from an incident that occurred last month where he was engaged in making unreasonable noise which disturbed the public peace.

Vaivai, who is facing one count of “conspiracy to distribute and possess with intent to distribute methamphetamine”, was arraigned last Friday morning at the federal court in Honolulu, before US Magistrate Judge, Richard L. Puglisi.

The defendant entered a not guilty plea and federal prosecutors have filed a motion to detain the Vaivai without bail, arguing that the crime for which he is accused carries a jail term of more than 10 years, court filing states.

Vaivai was remanded to the custody of the U.S. Marshals Service with a detention hearing scheduled for tomorrow, Oct. 2.  Trial for Vaivai and his co-defendants is set for June next year.

The 13-count indictment alleges that the defendants conducted drug trafficking activities in Hawai’i sometime between June 2017 to about Aug. 22 this year. It’s not clear from court filings as to when Vaivai returned to American Samoa.

The court has already granted the federal government’s motion declaring the case as “complex”.

Prosecutors said that the indictment in this case includes a “complex conspiracy that charges fourteen defendants in two jurisdictions.” While Hawaii is one jurisdiction, prosecutors didn’t identify the other jurisdiction.

The government also says that the indictment is the culmination of over a year long investigation that involved the interception of thousands of pertinent communications over multiple telephones — pursuant to electronic surveillance orders — in place during a period of five months.

Prosecutors say it will be necessary in this case to transcribe and prepare transcripts of foreign language wire intercepts. Discovery will accordingly be voluminous and review of it will be time consuming.

Furthermore, the criminal relationships of the various defendants with each other are complex, and a number of individual instances of drug-trafficking and drug possession fall within the framework of the charges or provide evidence of defendants’ knowledge and intent.