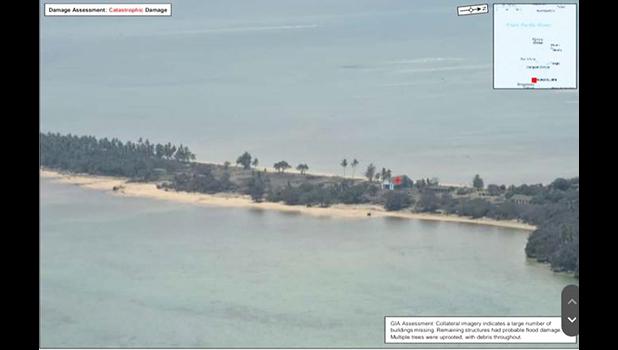 Washington, D.C. — Uifa’atali Amata requested information from the U.S. government Tuesday on the status of U.S. participation in aid efforts for the Kingdom of Tonga, which was devastated this weekend by volcanic ash and tsunami waves, with unknown loss of life, major damages, and an outage of the undersea cable communications services.

“Tonga has major needs for international assistance, and the U.S. is moving to support efforts by Australia, New Zealand and other Pacific region nations to provide help to the people of Tonga,” Congresswoman Amata said. “An initial grant of $100,000 in USAID funds has been approved, focused on the most immediate needs of emergency shelter and drinking water. A U.S. Navy vessel is also in the region at readiness for any lifesaving response effort that might be needed.”

“I spoke with U.S. Chargé d’Affaires Tony Greubel in Fiji, who served for years in Samoa,” Amata continued. “He officially declared the disaster on January 16th so the U.S. could respond. I want to wish him, the staff there, and any emergency personnel responding all the best from American Samoa as they are likely to be working around the clock in the days ahead.”

USAID and the U.S. Department of Defense are spearheading U.S. participation in the international relief efforts, and the State Department is working with the Tongan Ambassador to the United States. Congresswoman Amata appreciates all this information from officials, on behalf of people all over the Pacific region who are watching the news closely out of concern for the Tongan people. Amata has requested ongoing updates with in-depth information and details. “I am encouraged that U.S. efforts are underway, and I will do my best to keep you informed,” concluded Amata.

An aerial view of Atatā island taken by New Zealand Defence Force after the eruption of Hunga Tonga-Hunga Ha'apai and tsunami. Photo: NZDF

The Tongan government has so far confirmed three deaths in relation to Saturday's eruption of Hunga Tonga-Hunga Ha'apai, and all houses on the island of Mango were also wiped out.

The New Zealand Defence Force has described the damage to the island of Atatā as "catastrophic" in its surveillance photo, which was posted online by a resort based there.

The United Nations Institute for Training and Research (UNITAR) also released an image of Atatā island on 18 January, with an assessment that 72 structures had been damaged and the entire island covered in ash.

However, it noted it was a preliminary analysis and had not yet been validated on the ground.

The Royal Sunset Island resort posted on Facebook that all residents had now been evacuated to the mainland.

The resort was fully submerged by the tsunami and it was not expected there would be much left.

Meanwhile, the New Zealand government today announced two naval ships with supplies had been approved for arrival in Tonga.

The ships were sent before an official request for help from the Tongan government, but the statement from Minister of Foreign Affairs Nanaia Mahuta's office this afternoon confirmed the vessels - expected to arrive by Friday, depending on weather - had been approved.

The eruption was likely the world's largest in the past three decades, and support and aid efforts have been stymied by communications outages after the blast.

US company SubCom expected repairs to the undersea cable, which carries most of Tonga's communications, would take at least four weeks.

A mobile network was expected to be established using the University of South Pacific's satellite dish today, though the connection would likely be limited and patchy.

Volcanic activity and tsunami risk continues to be monitored.