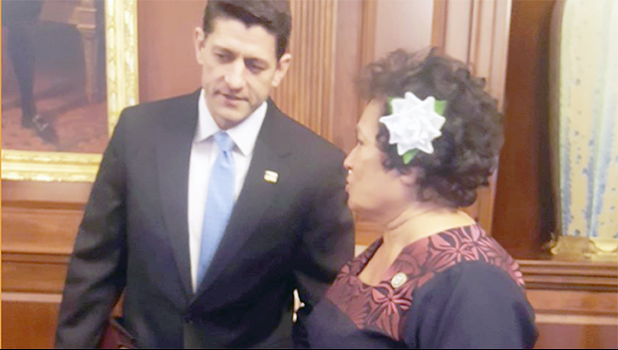 Washington, D.C. — “Although House leadership has pulled the bill for now it would not have affected American Samoa in the first place,” said Congresswoman Aumua Amata. “Because this is a reconciliation bill, only those provisions included in the 2010 Affordable Care Act can be considered in this bill.  The reason reconciliation is being used, is to make it easier to pass in the Senate where it will only require 51 votes instead of the usual 60.  The good news is that there is a three step process and the territories will be considered in step three,” continued the Congresswoman.

“Although step three will be considered at a later time, I wanted to introduce it now so we can get the discussion started.  To that end, I have already spoken to Speaker Ryan who assures me that my proposal will be taken up in the third phase, and I look forward to working with him and the committee chairmen when that happens.  Congress is scheduled to have several district work periods coming up, and during that time, I will be hosting townhall meetings to update our people about my efforts in Washington to improve their healthcare, and other the work we are doing on their behalf,” concluded Amata.