Aiga bus crashes in Aua: luckily no one is seriously injured 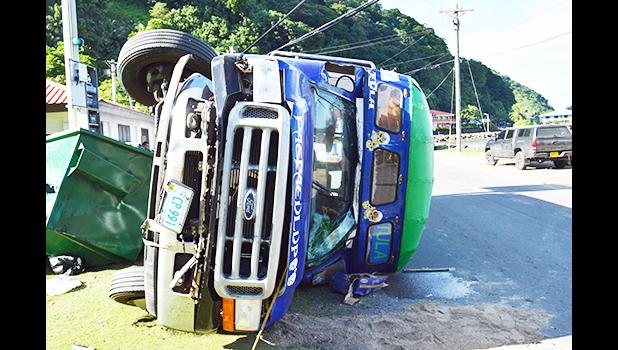 Pago Pago, AMERICAN SAMOA — All seventeen passengers of the aiga bus from Tula that crashed at the three corners in Aua yesterday morning received immediate medical treatment through the help of EMS crews and Health officials who responded to the scene when the accident occurred.

The accident occurred at around 8:30a.m when the bus from Tula ran off the road and crashed into a rubbish bin nearly missing an electric poll on the side of the road.

Bystanders who witnessed the accident quickly rushed to the scene and offered help to the passengers of the bus while awaiting the arrived of medical personnel and first responders.

Six police units with several police officers, along with three motorcycles, a fire truck and two EMS units with several EMS crew quickly responded to the scene and immediately offered medical assistance to the injured passengers.

All the seventeen passengers were removed from the bus and were taken into the Catholic Church building for immediate treatment before they were transported to the LBJ for further medical care.

Some passengers were removed from the bus through windows while others were removed using the back side of the bus. The driver of the aiga bus escaped injury and was immediately taken to the Fagatogo Police Central Station for further investigation.

Several eyewitnesses told Samoa News that the bus was traveling at a high rate of speed from the Onesosopo area until it crashed in Aua.

According to one eyewitness, she told Samoa News that this was the same bus that travels at a high rate of speed whenever it comes to the public highway in Onesosopo.

“There were times that I saw this bus traveling 50mph or even more and I truly believe that this is the main factor of the incident this morning (yesterday morning), the bus was speeding and lost control,” the eyewitness said.

“I’m not a police officer but my own personal view is that the bus was traveling at a high rate of speed before it crashed,” the witness said, adding that he quickly ran to the scene to offer his assistance.

A police officer at the scene told Samoa News that all of the seventeen passengers received non-life threatening injuries and were treated on the scene by medical officials before they were transported to the LBJ Hospital for further medical assistance.

The officer also confirmed that the matter is now under investigation. No further information was offered to Samoa News regarding the incident.